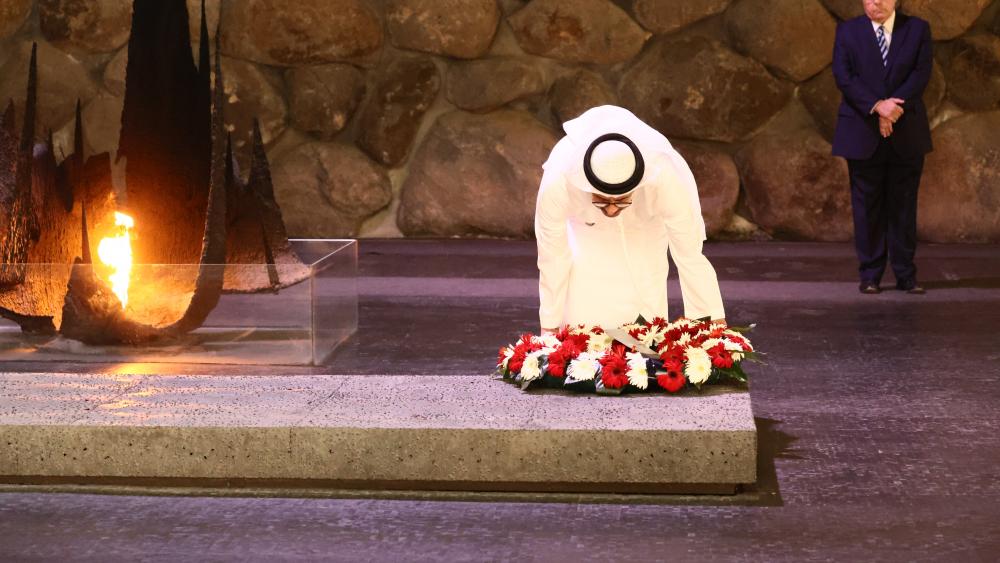 JERUSALEM, Israel – Israel is celebrating the second anniversary of the signing of the Abraham Accords, a historic series of agreements that saw Israel normalize ties with the United Arab Emirates, Bahrain, Morocco and Sudan.

The foreign minister laid a wreath at Yad Vashem’s Hall of Remembrance in honor of the six million Jews who died at the hands of the Nazis.

“I am here today to remind ourselves of the lessons that history teaches us and the great responsibility upon us to act with tolerance for building our community and society,” he wrote in the guestbook. “We must take the brave step of building a bridge of true peace for the coming generations.”

Next, Israeli Prime Minister Yair Lapid hosted bin Zayed at his official residence in Jerusalem. The two leaders held a private meeting during which they discussed “continuing economic development and cooperation in the fields of agriculture, energy, water, food security, and more,” according to a statement released by the prime minister’s office.

My friend, your historic visit here today marks another milestone in our nations’ friendship.

Together, we’re building a brighter future for all the people of our region. pic.twitter.com/yPVLqExORf

Israeli President Isaac Herzog held a reception celebrating the Abraham Accords during which he expressed his desire for Israel to not only deepen economic and cultural ties with the UAE, but also Morocco, Sudan and Bahrain.

“I intend to visit Bahrain in the coming months as the guest of His Majesty King Hamad bin Isa Al Khalifa in order to continue exploring together new ways to enhance our nations’ cooperation, for the sake of the peace, prosperity, and success of our entire region," said Herzog.

Today we welcome with open arms the Foreign Minister of the UAE, HH Sheikh @ABZayed. We are delighted to celebrate His Highness's visit to Israel, two years after the signing of the historic Abraham Accords.pic.twitter.com/47ZRMbOnjj

He praised the newfound peace between the “children of Abraham” and offered a hopeful prayer for more partnerships to come.

“Together we offer a prayer, a prayer shared by all children of Abraham, members of all religions and faiths in the Middle East, that the years to come may be marked by tremendous hope: for our empowering common endeavors, for interfaith harmony, and most of all, for the building of new bridges between us,” he said.