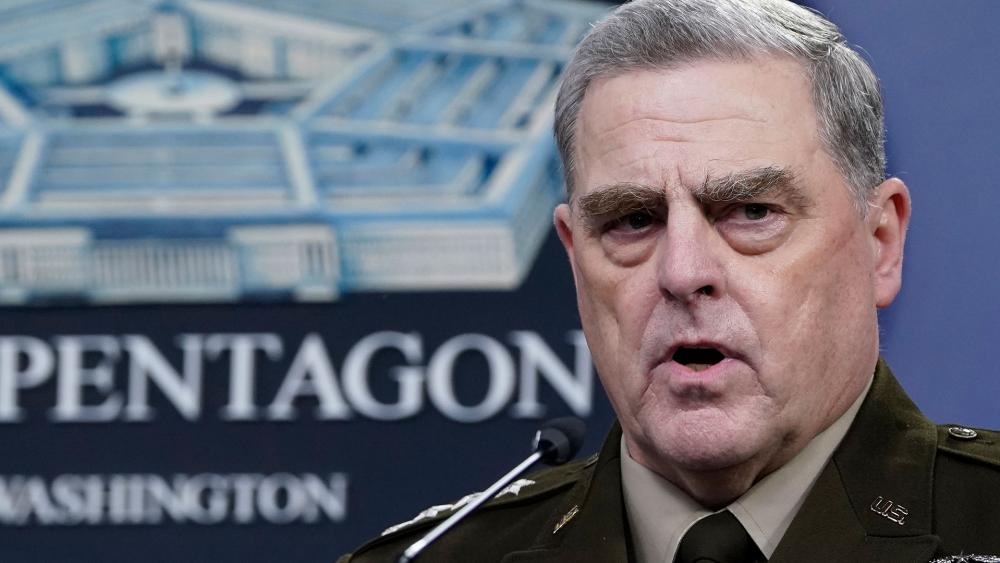 In this Sept. 1, 2021, file photo Chairman of the Joint Chiefs of Staff Gen. Mark Milley speaks during a briefing with Secretary of Defense Lloyd Austin at the Pentagon in Washington. (AP Photo/Susan Walsh, File)
6272736712001
Did America's Top General Work Against Trump and Commit Treason? Rubio Calls for Biden to Fire Joint Chiefs Chairman

According to the book, Milley assured his Chinese counterparts two times that Trump would not launch a military strike against them. And he promised the regime that if any attack was coming, he would warn them in advance.

After the shocking news broke on Wednesday, Milley defended the phone calls he made to America's communist Chinese adversaries. And President Biden defended Milley as well.

Sen. Marco Rubio (R-FL) has sent a letter to Biden calling for Milley to be dismissed immediately. Other officials are calling for his resignation.

This firestorm was all set off by excerpts from the book titled Peril by Bob Woodward and Robert Costa.

The authors claim Milley reviewed intelligence that China was concerned by chaos in the United States, specifically surrounding the election and the Jan. 6 Capitol riot.

According to the book's excerpt released Tuesday, Milley went behind the back of the commander-in-chief to reassure his Chinese military counterpart, "We are 100 percent steady. Everything's fine. But democracy can be sloppy sometimes."

Two separate phone calls between Milley and Beijing were reported, the general reportedly feeling the need to assure China, "If we're going to attack, I'm going to call you ahead of time."

Woodward and Costa also claim to have received the transcript of a call between Milley and House Speaker Nancy Pelosi (D-CA) following the Jan. 6 riot.

Pelosi was reportedly concerned that Trump was both unstable and dangerous.

Milley is then said to have held a meeting at the Pentagon, telling military leadership that they were not to act on any order from Trump to use nuclear weapons without his sign-off.

Milley then looked everyone in the eye and asked each one of them to say they agreed.

"You have a military leader basically ignoring the Constitution, deciding he's going to call a potential adversary and an enemy of the United States, and collude with them and tell them, 'If I'm ever ordered to do something. I'm going to tell you about it first, and also break the chain of command when it comes to the nuclear codes of this country and its control...," Rubio said.

The Florida senator said he hopes the report is not true and that Milley denies the entire thing because if it is true it's one of the most serious breaches of constitutional order in modern American history.

Back in July, the general was asked about comments in "books published." He was adamant that he and the other members of the Joint Chiefs have always maintained the tradition of an apolitical military and the oath they took to the Constitution.

"Not one time did we violate that," Milley said. "The entire time from time of commissioning to today, I can say that every one of us maintained our oath of allegiance to that document, the Constitution, and everything that's contained within it."

Meanwhile, former President Trump has expressed skepticism that these claims about Milley going behind his back to Beijing are true.

However, he did say that if they are, the actions are treasonous. "Actions should be taken immediately against Milley," Trump said.

"I assume he would be tried for TREASON in that he would have been dealing with his Chinese counterpart behind the President's back and telling China that he would be giving them notification 'of an attack.' Can't do that!" the former president said.

Trump is also making it clear that he was never considering attacking China anyway.