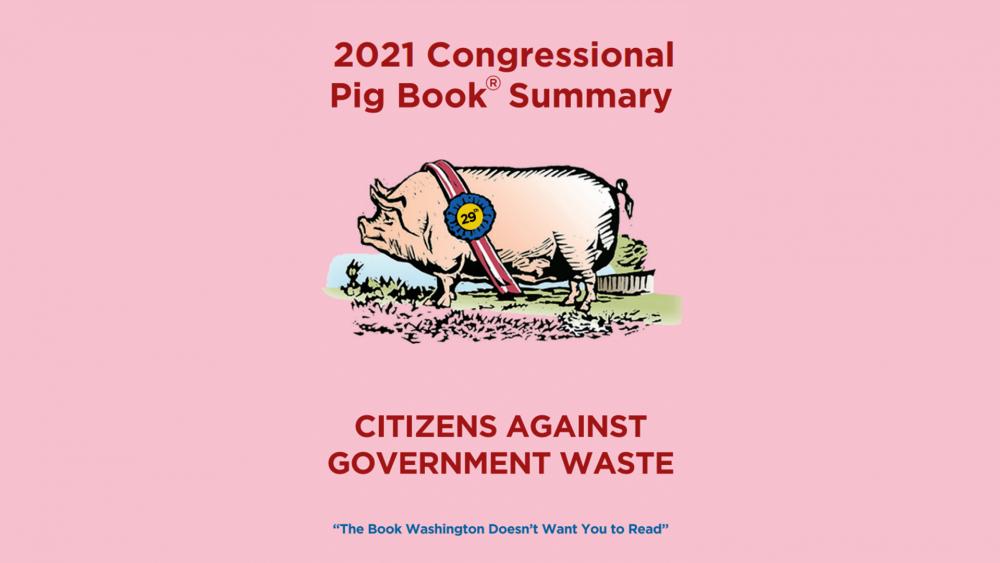 The annual look at how Congress can waste taxpayer money is hot off the press.  The 2021 Congressional Pig Book is sure to get the attention and raise blood pressure with examples of how your tax dollars are wasted and misused by lawmakers.

A number of national lawmakers still concerned about spending and deficits joined in a virtual news conference Wednesday to highlight out-of-control spending they say could eventually bankrupt America.

The 2021 Pig Book highlights some of Capitol Hill’s latest cases of wasteful spending:

'Back with a Vengeance'

Citizens Against Government Waste President Tom Schatz, who oversees the annual Pig Book, pointed out after a supposed 10-year ban, wasteful earmark projects have returned, but in disguise.

He revealed, “The new earmarks are called Community Project Funding, an absurd designation that covers almost everything the government does.”

Sen. Rand Paul (R-Ky) said the Pig Book shows these pork-barrel projects are back with a vengeance.

Texas Republican Sen. Ted Cruz added, “For far too long earmarks have been used as a form of legal bribery, enabling party bosses to pass irresponsible and bloated spending that has ballooned government spending and added to our staggering $28 trillion national debt.”

'Two Trillion Plus Plus Plus'

And these lawmakers warned that much worse is still ahead, thanks to – among other things -- President Joe Biden’s massive infrastructure bill.

Only about six percent will go for actual infrastructure like roads and bridges, while the rest covers a wide and questionable range.

“Silly things like a squirrel sanctuary in Tennessee or turtle tunnels in Florida and critter crossings in Vermont,” commented Sen. Joni Ernst (R-IA). “Or even worse, billion-dollar boondoggles like the hi-speed rail train in California, which is going nowhere fast. This train is $15 billion over budget and 15 years behind schedule.”

“I was not sent to Washington to bankrupt our great country,” insisted U.S. Rep. Ralph Norman (R-SC). “Friends, our nation is over $28 trillion -- and counting -- in debt, and I firmly believe that dark days lie ahead for our children and grandchildren.”