Trump Says His Supporters Won't Vote in Next Elections: 'Disastrous for Republicans if This Actually Happens' 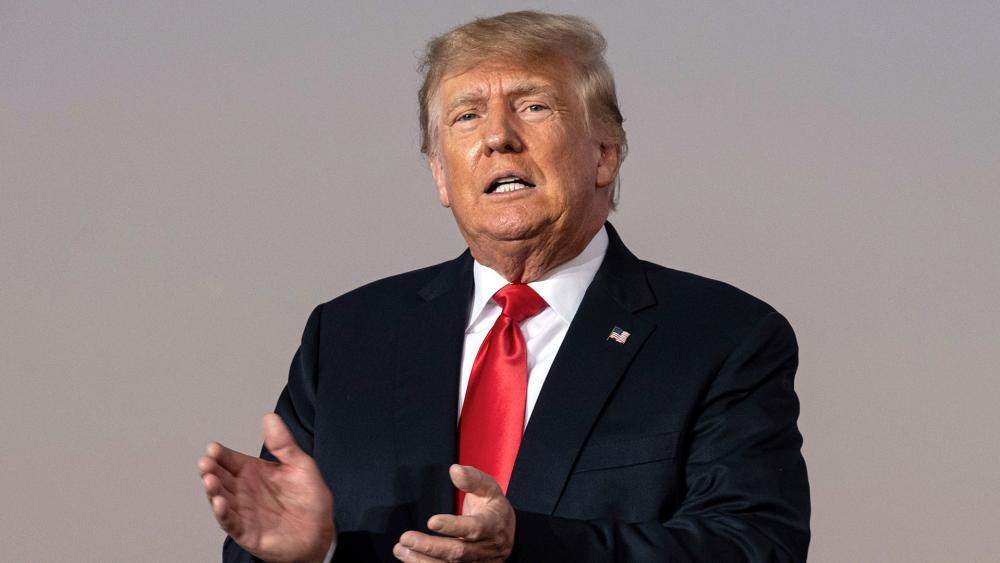 Image source: AP photo
6277275952001
Trump Says His Supporters Won't Vote in Next Elections: 'Disastrous for Republicans if This Actually Happens'

Former President Donald Trump is urging members of his own party to sit out the upcoming elections unless his fraud claims from the 2020 election are resolved.

In a statement released Wednesday, Trump said, "If we don't solve the presidential election fraud of 2020, Republicans will not be voting" in the 2022 and 2024 elections.

"It is the single most important thing for Republicans to do," Trump added.

At a rally in Des Moines, Iowa on Saturday, The Guardian reports Trump insisted he won key states that were awarded to Joe Biden in 2020 and proudly declared that he will never concede defeat.

Trump repeated the claim during a telephone call at a rally for Glenn Youngkin, Virginia's GOP nominee for governor, in Richmond Wednesday night.

However, regarding the Virginia race, Trump changed his tone on voting. He urged the audience to get out to vote for the businessman and first-time candidate. "Glenn Youngkin is a great gentleman," said Trump.

During an appearance on CBN News' Faith Nation Thursday, CBN News Chief Political Analyst David Brody said he was at first clearly concerned about Trump's statement that Republicans shouldn't vote, but then he started to read specifically through the statement again.

"First of all, kind with of a macro view – was it the smart thing to do? No, it was not the smart thing to do. OK? Period. End. Let's move on from that," Brody said. "But if you actually look at what he's saying, how do I say this – he is in the role of the armchair quarterback. The political prognosticator.  The analyst on CNN, Fox and MSNBC."

"He is specifically saying, 'Republicans will not vote,' is what he is saying," he continued. "They will not vote in 2022, 2024.  What we just said on Faith Nation and what many of the articles are saying in the media is that Trump is 'urging'...that is the word we used. Urging his supporters not to do it."

"He never does that," the CBN News political analyst noted. "He doesn't officially do that. He never says, 'Therefore I hereby proclaim. It's important. He doesn't say 'I hereby proclaim that they shouldn't do it.'"

When asked if, since Trump put out the statement, some of the former president's supporters would follow his lead, Brody replied, "Absolutely. And that's why I said at the beginning, that's why I did the disclaimer. In the macro, it's a bad move. It's a bad move because that's exactly what they are going to hear."

"Ultimately, what does Trump want to do here?" he asked. "There's a lot of things he's trying to do here. But one thing that's very, very interesting is that he's basically saying, 'Look, if you don't clean it up, then my folks are not going to show up to the polls.'  You've got to understand.  He really thinks this election was rigged. And there are tens of millions of voters in this country that think this election was rigged and stolen. So, therefore, if you really believe that, and you don't think anything has really changed, then why would you show up for a rigged game? That's the way they see it. Why would you show up for an end game like that?"

But if Trump's base won't show up to the polls, won't that just be giving Democrats wins?

"Yes, absolutely 100 percent," Brody said. "And that's why it was a bad move by Trump. I'm just trying to get into the psyche of why he would do it. And why the MAGA folks would not show up, to begin with."

"This is a tough one," the CBN News political analyst said. "He shouldn't have done it. But at the same time, you can make the argument in MAGA land, what the MAGA folks would think. You could say, 'I'm going to go one step backward to go two steps forward.'  They're saying we can't let this happen again. We can't have a rigged and stolen election, the way they see it, happen again. So we will sit out as a protest and let the Democrats, let the Democrats do their thing, and win elections in 2022 and 2024. And the country will come crumbling down, according to MAGA. But that's the cost over what they believe should be free and fair elections which is the bigger Republican principle at stake here."

"So it's a very interesting way to put it," Brody added. "But in the short term politically, it's disastrous for Republicans if this actually happens. Absolutely."