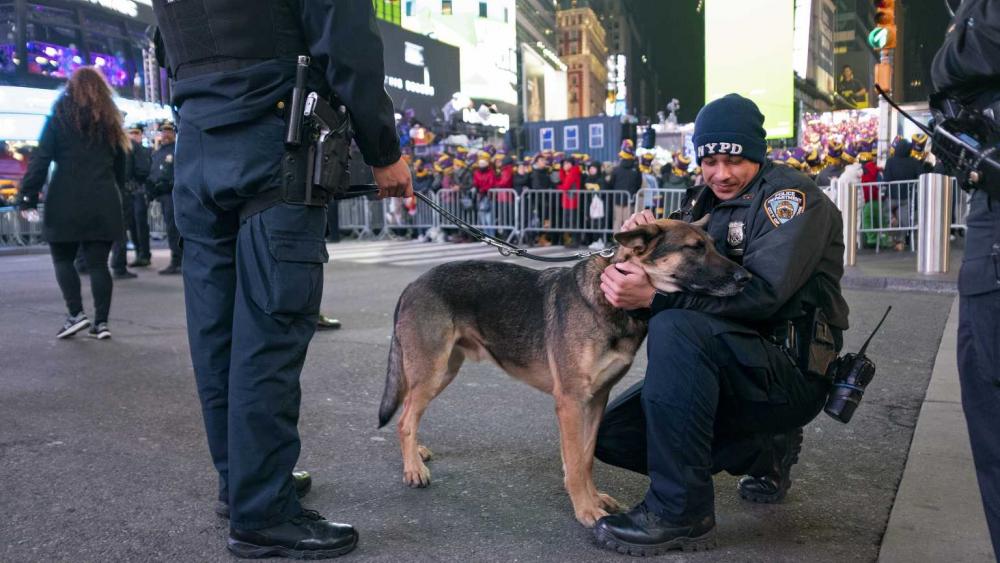 “Does anyone remember my loved one?”

It’s a question many family of fallen officers ask. Wednesday’s graduation ceremony on Randall’s Island answered that question with a resounding yes with names honoring those lost in the line of duty.

Ten new grads are ready to partner up and start fighting crime and saving lives, and each has a special name to let everyone know that those who died serving will never be forgotten.

Graduating into K9 officer status is no easy task. Hundreds of hours are spent learning detailed obedience, bomb-sniffing, getting targets, and many other skills.

Chief Martine Materasso, head of the Counterterrorism Bureau, said, “Each of these teams has gone through extensive training to get to this day, all in an effort to do their part to keep this great city safe now and in the future,” according to the New York Post.

Each dog is named after an officer who died in the line of duty.

Girodano’s new four-legged partner, Socha, is named after Detective Ferdinand Socha, who died on July 4, 1940, while investigating a time bomb at the World’s Fair in Flushing Meadows park.

Officer Michele Capizzuto’s 3-year-old K9 Yogi, a yellow Labrador and pointer mix, was named after Detective Stuart Fishkin, who died from cancer that developed after his search and rescue recovery efforts in the days following September 11th.

Fishkin’s widow told the Post that her husband “would love this.”

The dogs are already eager to get to work – Detective Anthony Biondolilo told reporters that his new partner, a 2-year-old chocolate lab named Lynch, saw his son jump in the pool and “thought he was in trouble.”

“And then he jumped in the pool and swam over and pushed my son to the side of the pool. He’s a good dog.”

The NYPD posted all of the dogs and who they are named in remembrance of – congrats to these hard-working pups!

Today was graduation day for our newest @NYPDCT & Bomb Squad K-9’s. Each of our highly trained K-9’s was named in remembrance of our fallen heroes and will be responsible for keeping our city streets safe. pic.twitter.com/9fcEeVNanb

“K-9 Zadro is named after Detective James Zadroga who passed away as a direct result of his participation in the rescue efforts of the World Trade Center in 2006.”

“K-9 Lynch is named after Detective Joseph J. Lynch who was killed while investigating a time bomb found at the British Pavilion at the World’s Fair in Flushing Meadow in 1940.”

“K-9 Louie is naked after Detective Luis Alvarez who died in 2019 of cancer he developed as a direct result of participating in rescue & recovery efforts at the World Trade Center following the 9/11 terrorist attacks.”

“K-9 Yogi is named after Detective Stuart F. Fishkin. Detective Fishkin died in 2015 as a direct result of his participation in rescue & recovery efforts at the World Trade Center site following the 9/11 terror it attacks.”

“K-9 Ralphy is named after Detective Rafael Ramos. Rafael and his partner Wenjian Liu were shot and killed in an ambush while on a counterterrorism deployment in Brooklyn in 2014.”

“K-9 Socha is named after Detective Ferdinand Socha who was killed while investigating a time bomb found at the British Pavilion at the World’s Fair in Flushing Meadow in 1940. He was killed with his partner Detective Joseph J. Lynch.”

“K-9 Davie is named after Police Officer David Guttenberg who was shot and killed after interrupting a robbery in progress in Bay Ridge, Brooklyn in 1978.”

“K-9 Danny is named after Detective Claude Richards who died during the rescue efforts following the terrorist attacks on September 11, 2001.”

“K-9 Zander is named after Patrolman Alexander C. Stutt who was killed in the line of duty on June 9, 1939, while serving in the Emergency Service Unit.”

“K-9 Connolly is named after Police Officer Vincent Connolly, who was killed in 1973 in a vehicle accident while responding to an explosion in a Fifth Avenue building.”