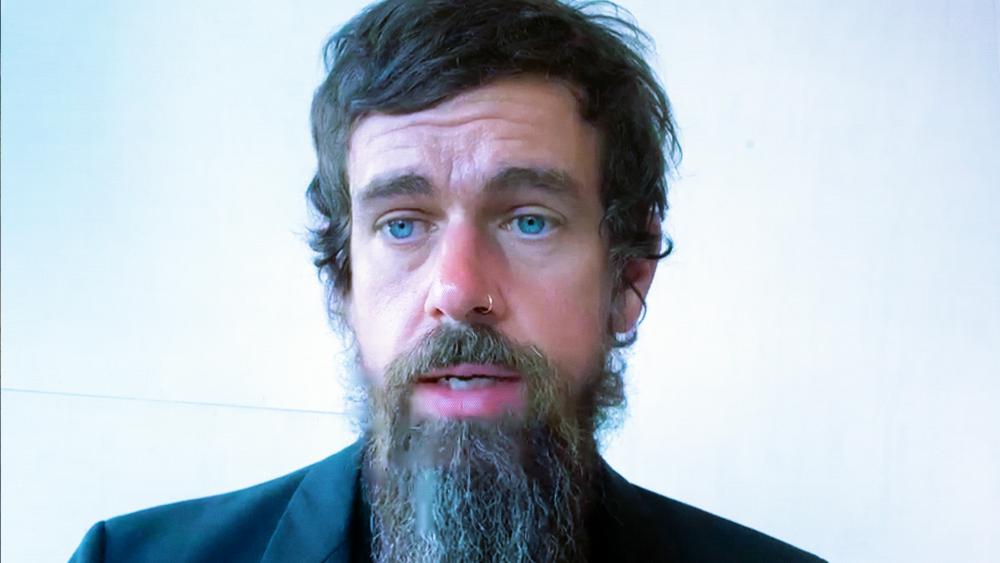 In this Oct. 28, 2020, file photo, Twitter CEO Jack Dorsey appears on a screen as he speaks remotely during a hearing before the Senate Commerce Committee on Capitol Hill, in Washington. (Michael Reynolds/Pool Photo via AP, File)

Twitter co-founder Jack Dorsey is stepping down as CEO of the social media platform, and investors couldn't be happier. Dorsey was at the helm when Twitter banned President Trump and censored other conservatives.

Dorsey will remain on the board until his term expires in 2022.  Agrawal joined Twitter in 2011 and has been CTO since 2017.

In a letter posted on his Twitter account, Dorsey said he was “really sad...yet really happy” about leaving the company and that it was his decision. On Sunday, Dorsey had sent a cryptic tweet reading only “I love Twitter.”

Twitter shares rose 5% to $49.47 in morning trading after the announcement.

Conservatives have long been upset at how much Big Tech (Facebook, Twitter and Google) has been censoring their messages and de-platforming them.

That debate grew to a crescendo in the heated political atmosphere leading up to the 2020 election. As CBN News reported, Twitter banned President Donald Trump from its platform claiming "risk of further incitement of violence" following the Jan. 6 riot at the U.S. Capitol.

Twitter said, "After close review of recent Tweets from the realDonaldTrump account and the context around them - specifically how they are being received and interpreted on and off Twitter - we have permanently suspended the account."

Trump sued the company, along with Facebook and YouTube, in July for censorship. The lawsuit filed in the U.S. District Court for Florida's southern district, names Facebook CEO Mark Zuckerberg, Google CEO Sundar Pichai, and Dorsey.

Dorsey has faced several distractions as CEO, starting with the fact that he’s also founder and CEO of the payments company Square. Some big investors have openly questioned whether he could effectively lead both companies.

Last year, the company came to an agreement with two of those activist investors that kept Dorsey in the top job and gave a seat on the company board to Elliott Management Corp., which owned about 4% of Twitter’s stock, and another to Silver Lake.

Forced Out After Only a Year as CEO

The early days of Twitter began with a tweet  sent by Dorsey on March 21, 2006, that read “just setting up my twttr.” Twitter went through a period of robust growth during its start, but as the growth slowed the San Francisco company began tweaking its format in a bid to make it easier and more engaging to use.

Dorsey became Twitter CEO in 2007, but was forced out the following year. He returned to the role in 2015. In his goodbye letter, Dorsey said he has “worked hard to ensure this company can break away from its founding and founders” and that to focus too much on whether companies are led by their founders is “severely limiting.”

Dorsey has also drawn the ire of Democrat lawmakers as well.  As CBN News reported last March, Dorsey, Facebook's Mark Zuckerberg, and Google's Sundar Pachai all faced angry calls from Democrats on the House Energy and Commerce Committee to do even more censoring of what they label "misinformation."

When their turn came, some committee Republicans blasted Big Tech's silencing of conservative ideas and voices.

U.S. Rep. Bob Latta (R-Ohio) stated, "Your companies had the power to silence the president of the United States, shut off legitimate journalism in Australia, shut down legitimate scientific debate on a variety of issues, dictate which articles or websites are seen by Americans when they search the internet."

"We're all aware of Big Tech's ever-increasing censorship of conservative voices and their commitment to serve the radical progressive agenda by influencing a generation of children and removing, shutting down or canceling any news, books and even now toys that aren't considered 'woke.' This is fundamentally un-American," Latta continued.

Dorsey answered all the criticism from committee members of both parties.

"We are a bunch of humans with a desire to make the world around us better for everyone living today and those who come after us," he said. "We make mistakes in prioritization and in execution. We commit to being open about these and doing our best to remedy what we control."

Twitter also announced on Monday a new board chairman, Bret Taylor, to replace its existing chair, Patrick Pichette. Pichette will remain on the board. Taylor has been on Twitter’s board since 2016 and is the president and COO of business software company Salesforce.