Nativity Scene Can Stay in Local Park for Now, Despite Legal Threat and Protest: 'We Refused to Take It Down' 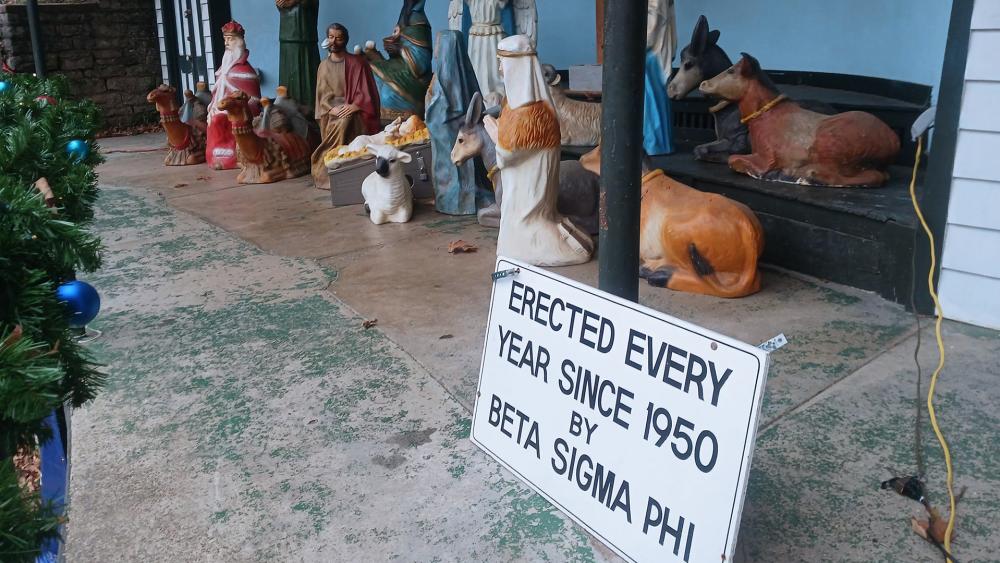 A nativity scene that has been part of a decades-old tradition in a local Eureka Springs, Arkansas park will remain on display during this Christmas season. But whether or not it will be allowed to continue in the future remains to be seen.

The Arkansas Democrat-Gazette reports the nativity scene was sponsored every year in Basin Park by the Eureka Springs Chapter of the Beta Sigma Phi sorority since 1950.

The display was put up in the park every year until 2019. The sorority donated the nativity scene to the Great Passion Play in 2021 and asked if the display could return to the park this year, according to the outlet.

"We said, sure, whatever you guys want," Randal Christy, the play's executive director, said. "We're just trying to help them."

But then Christy told KWNA-TV he got a call from Mayor Robert "Butch" Berry asking him to remove the display.

"We decided we're not taking it down. We refused to take it down," Christy said.

In a Facebook post, Christy explained why he refused to remove the nativity scene from the park.

"Eureka Springs Mayor and City Attorney are demanding that we (The Great Passion Play) REMOVE the Nativity Scene from the city's Basin Park.  We are refusing to do so. We ask for your prayers as we take a stand," Christy wrote. "Christmas is the National Holiday in recognition of the birth of Jesus Christ! The Nativity Scene has been erected since 1950 - 72 years - at Christmas time. The Passion Play puts it up for Beta Sigma Phi as a public service to the community... as a regular part of our Christmas decorations.    As Executive Director of The Great Passion Play,  America's #1 attended outdoor drama... I REFUSE TO TAKE THIS DOWN !!"

Mayor Berry told The Gazette he didn't demand the organization take down the display. He just requested that they remove it. A city resident had threatened to file a lawsuit saying the nativity scene violated his constitutional right to freedom of religion.

"That's all you've got to do nowadays to get city governments to cave in," Christy told the outlet. "You just have to threaten a lawsuit. They're going to scramble and avoid their court costs even though they've got an attorney on file. If it's all about Jesus, it's not even worth a few hundred dollars of court costs. That's how I feel."

The mayor conferred with City Attorney Forrest Jacobi and Scott Miskiel, the city's parks director, as well as an attorney for Arkansas Municipal League who advised him it might be best to remove the display. If it was allowed to remain, the city can't discriminate against any other religious organization that wants to get a permit and put a display in the park, according to The Gazette.

"We either had to have it removed or we had to allow everything to be displayed, including people who worship Satan," Mayor Berry said. "Based on that, they said it was best if we just not have anything at all."

He explained he was trying to reach a compromise, trying to conform to rulings of the U.S. Supreme Court on what the Constitution allows for religious displays.

For now, the city will issue a permit to the Great Passion Play for $25, so they can keep the nativity scene in the park this year. But the municipality may draft a policy in the future regarding displays in the park, according to The Gazette.

"We're going to issue a permit for them now," Berry said. "We've agreed that we would include secular displays, putting a Christmas tree up there along with the manger, so it's not just a Protestant religion display."

He also told the newspaper he notified Christy.

In a Facebook post, Christy thanked the mayor, writing: "I want to sincerely, personally thank Eureka Springs Mayor, Butch Berry, who just notified me in writing that he has changed his mind and WILL NOT require us to remove our Nativity Scene out of the city's Basin Park. He and I will STAND TOGETHER to fight this potential lawsuit. We stand together to keep Christ and the Nativity in Christmas in Eureka Springs!!! I'm proud of Mayor Berry for making the right decision."