NYC Mayor Issues Directive: City Will Treat Mentally Unstable Even Against Their Will 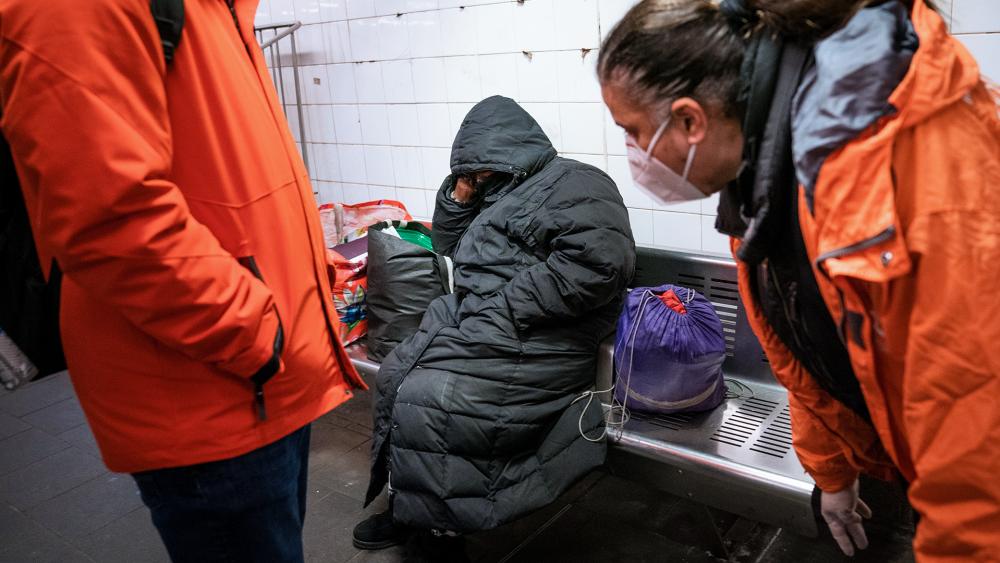 Homeless Outreach personnel reach out to a person sleeping on a bench in the Manhattan subway system, Monday, Feb. 21, 2022, in New York. (AP Photo/John Minchillo, File)

New York City's mayor announced Tuesday he's directing police and emergency responders to be more aggressive about getting severely mentally ill people off the streets and subways and into treatment, even if it means involuntarily hospitalizing some people who refuse care.

"These New Yorkers and hundreds of others like them are in urgent need of treatment, yet often refuse it when offered," Adams said at a news conference.

He noted the problem of mental illness has long been out in the open.

"No more walking by or looking away," the mayor said. He called it "a moral obligation to act."

The mayor's directive marks the latest attempt to ease a crisis decades in the making. It would give outreach workers, city hospitals, and first responders, including police, discretion to immediately hospitalize anyone they deem a danger to themselves or unable to care for themselves.

"The very nature of their illnesses keeps them from realizing they need intervention and support. Without that intervention, they remain lost and isolated from society, tormented by delusions and disordered thinking. They cycle in and out of hospitals and jails," Adams, a former police captain said.

The mayor called his plan a "long-term strategy to help more of those suffering from severe and untreated mental illness find their way to treatment and recovery."

In addition, new teams of clinicians and police officers are being deployed to patrol the busiest subway stations and respond to individuals with severe mental health issues, the mayor said.

The city also was rolling out training to police officers and other first responders to help them provide "compassionate care" in situations that could cause the involuntary removal of a person showing signs of mental illness in public places.

The New York City transit system has been a particular point of focus, with increased police presence. The subway system in 2021 recorded its highest number of assaults and murders in years, according to police statistics, The Wall Street Journal reported.

According to the outlet, Metropolitan Transportation Authority officials have been concerned that people may be avoiding public transportation because they are worried about crime after several high-profile shootings and other incidents, some involving those who were homeless or have mental health issues.

State law limits the ability of authorities to force someone into treatment unless they are a danger to themselves. However, Adams said it was a "myth" that the law required a person to be behaving in an "outrageously dangerous" or suicidal way before a police officer or medical worker could take action.

"A common misunderstanding persists that we cannot provide involuntary assistance unless the person is violent, suicidal, or presenting a risk of imminent harm," the mayor said. "This myth must be put to rest. Going forward, we will make every effort to assist those who are suffering from mental illness and whose illness is endangering them by preventing them from meeting their basic human needs."

As part of its initiative, the city is developing a phone line that would allow police officers to consult with mental health professionals. It will be operational by next year, according to WABC-TV.

"I know some people may look at what we're doing saying that we're trying to do something to take away the right of people. No, we're not. The right is that people should be able to live in dignity," Adams said.

The mayor's plan also includes an 11-point legislative agenda to fill in gaps in the mental health laws, according to CBS News. The mayor said that the program could also be applied to those who aren't homeless. He urged New Yorkers to become what he called "trauma identifiers," and to call either 311 or 911 to get help for people they see are in need of help.

As he expected, the mayor's announcement was condemned by some civil rights groups and advocates for the homeless.

"The Mayor is playing fast and loose with the legal rights of New Yorkers and is not dedicating the resources necessary to address the mental health crises that affect our communities," said Donna Lieberman, executive director of the New York Civil Liberties Union.

"Forcing people into treatment is a failed strategy for connecting people to long-term treatment and care," she said.

The Coalition for the Homeless also denounced the mayor's plan, saying the city should focus on expanding access to voluntary psychiatric treatment.

"Mayor Adams continues to get it wrong when it comes to his reliance on ineffective surveillance, policing, and involuntary transport and treatment of people with mental illness," said the coalition's executive director, Jacquelyn Simone.

The Legal Aid Society, along with several community-based defender services, said the mayor was correct in noting "decades of dysfunction" in mental health care. They argued state lawmakers "must no longer 'punt'" to address the crisis and approve legislation that would offer treatment, not jail, for people with mental health issues.

State lawmakers have been considering such legislation that would widen diversion programs for the mentally ill, a move supported by public defender groups.

Adams has called for an expansion of the use of 1999's "Kendra's Law," which allows courts to order defendants with mental illness to complete treatment.

The law was named after Kendra Webdale, who died after being pushed onto the subway tracks by a man with a history of mental illness.

When the Mentally ill Can No Longer Ask for Help, Should the Community Step In?

But the question is, does forced treatment work? In reality, it often backfires. For example, critics point to the mental health situation in California.

In a May 2022 op-ed published in The Washington Post, Neil Gong and Alex V. Barnard wrote, "Each year in California, tens of thousands of people are already transported involuntarily to ERs and admitted to hospitals against their will. These involuntary hospitalizations may save a person's life in the moment, which is no small thing, but research shows that many who undergo this process are traumatized and humiliated, leading to increased suicide risk and long-term distrust of treatment providers. When delivered in a heavy-handed way, court-ordered treatment is not only ineffective but can also drive people decisively away from essential services."

Gong and Barnard also noted that even though homeless advocates argue most homeless people are demanding voluntary resources and housing, the time may have passed for many of them to ask for help.

"The reality is that some people who might have accepted assistance earlier in their lives, had it been available, have deteriorated psychologically or become so skeptical of providers that they won't accept the help they need," they noted.

The authors also gave this example. "One anonymous county official we interviewed described an elderly homeless person with psychosis who had refused more than 100 offers of supported housing. We've observed such refusals ourselves, and we've watched people drink themselves to death or die from untreated medical conditions when left with purely voluntary supports in independent apartments."

"Our society should not sacrifice these vulnerable people on the altar of a one-size-fits-all ideal of voluntary care," Gong and Barnard added. 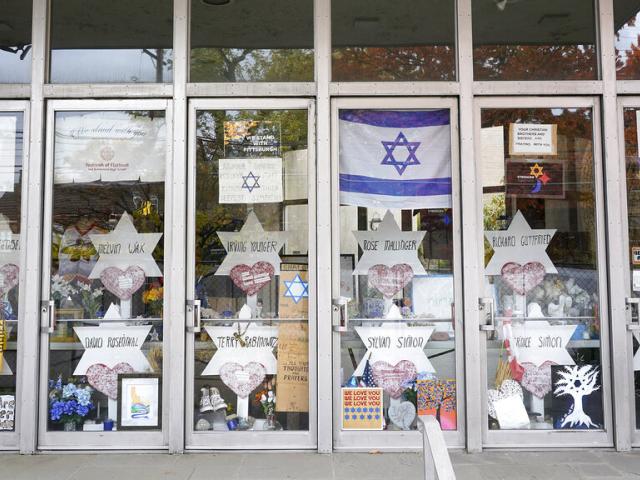 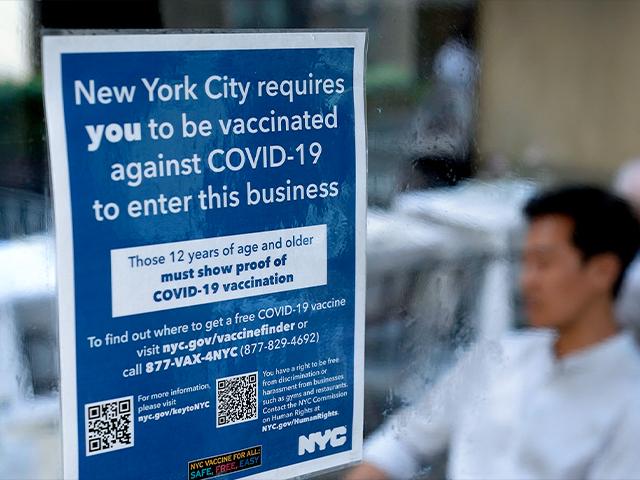 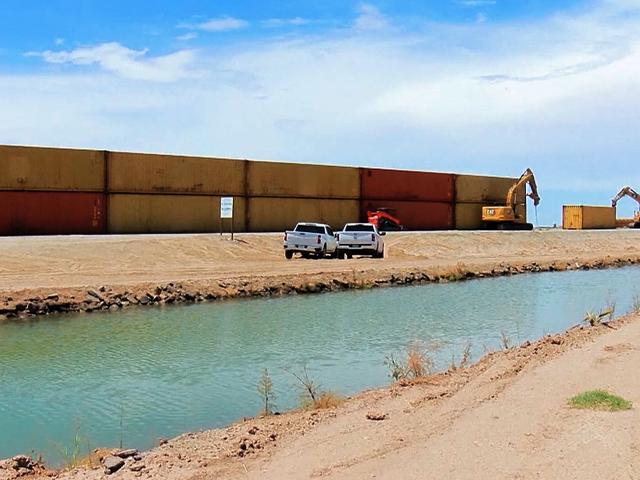 US Nearing 2 Million Border Arrests for First Time Ever in Record-Shattering Surge: 'Arizona Has Had Enough' 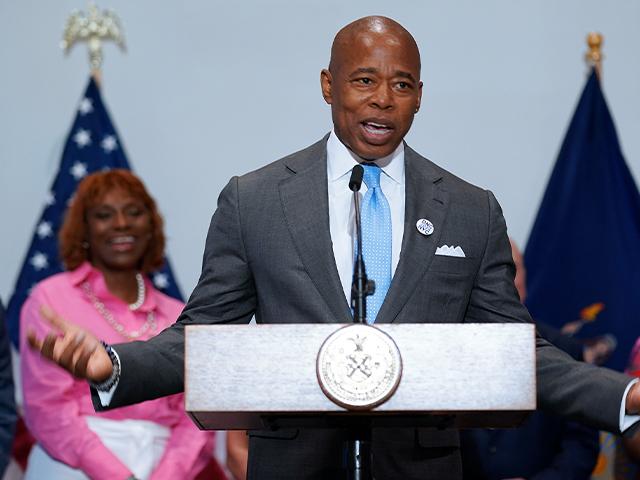