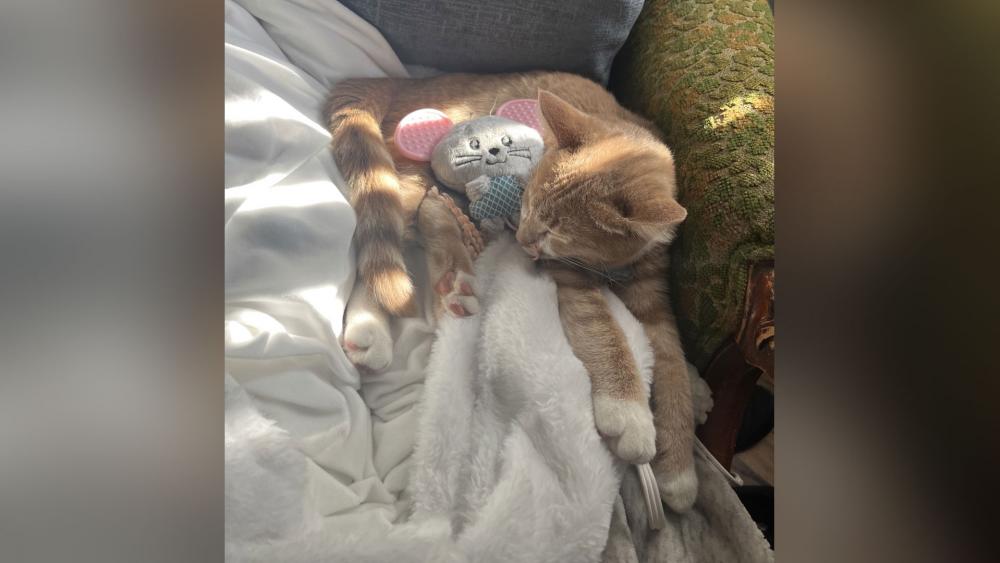 Firefighters in Farmington Hills, Michigan, are crediting a four-month-old kitten named Thor with saving the lives of a family of four after they were poisoned by carbon monoxide late last month.

Their story is being highlighted right now as millions of people in Florida, and possibly Georgia and South Carolina, are facing power outages from Hurricane Ian.

On Aug. 30, the Stamper family experienced a power outage during a summer storm. They connected a portable generator to help run their appliances. Unfortunately, their garage door accidentally got closed while the generator was running, exposing the family to deadly carbon monoxide gas, according to a press release from the Farmington Hills Fire Department.

While Heidi and Ronald Stamper, and their 13-year-old daughter Paige and 11-year-old son Quinn were sleeping, deadly carbon monoxide gas was silently building up in their home.

Fortunately, Thor woke Heidi with a screeching cry and was visibly sick. She took the cat outside and saw that his condition improved, but when she brought him back inside, she soon passed out.

Thor resumed his screeching and alerted the children who were able to get their semiconscious parents out of the house.

First responders with the Fire Department soon arrived and transported the family to a local hospital. Heidi and the children were later flown to Promedica Hospital in Toledo for specialized care for carbon monoxide poisoning.

The whole Stamper family survived their ordeal and Thor is being hailed as a hero, credited with saving their lives.

The Stampers now want others to learn from their difficult experience. They are helping the Fire Department spread the word that portable generators should only be operated OUTSIDE and must be placed far away and downwind from windows, doors, and vents.

"The Fire Department reminds everyone that generators should NEVER be used inside homes, garages, basements, sheds, or any other enclosed or partially enclosed spaces," said Farmington Hills Fire Chief Jon Unruh. "In this case, using a portable generator in an enclosed garage almost had deadly consequences."

Carbon monoxide is tasteless, colorless, odorless, and impossible for the human senses to detect. It builds up quickly and lingers for hours, even after generators are turned off.

At the time of the incident, the Stampers did not have any carbon monoxide detectors in their home. They have now installed several CO alarms, and so have their neighbors.

Traci Riley, a friend of the Stampers, created a GoFundMe page to help the family with their medical expenses. As of Sept. 29, the page had raised $6,370 towards the $50,000 goal.

On Sept. 15, Heidi Stamper posted a short update to the page.

"I have since gotten a check-up and they are concerned about my EKG results and shortness of breath. I have been referred to a few specialists and am getting everything checked out. The kids and Ron seem to be doing well thankfully," she wrote.

"The Farmington Hills Fire Department reached out to me to do a PSA about carbon monoxide and generators in the home and will also feature our kitten Thor and our daughter (if she will let us). Thank you so much for the continued support and love, we really do appreciate it!" she concluded.