Veteran CBN News Correspondent Recalls How He was 'Stranded by Faith' 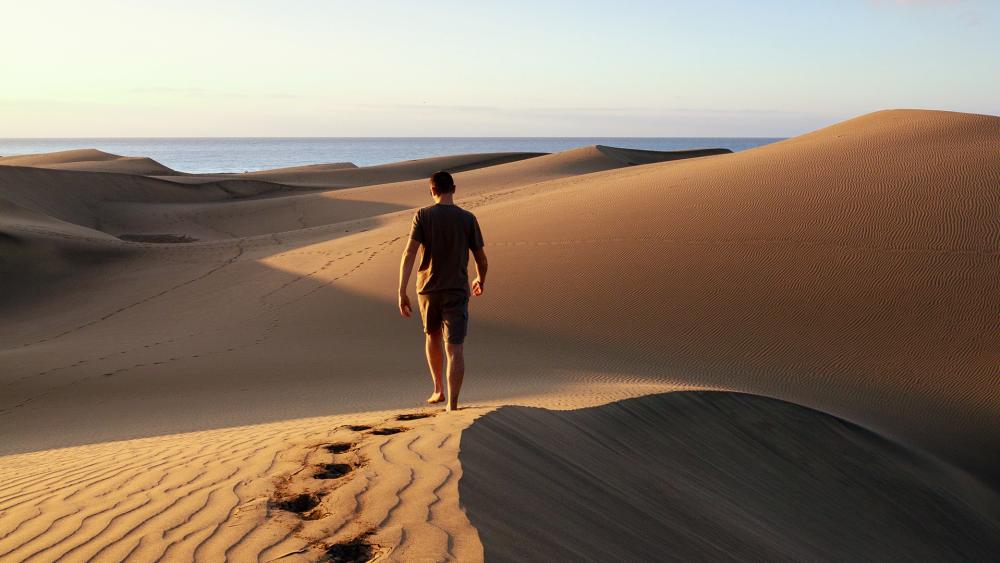 CBN.com - In 1971, I was a 16-year-old smart aleck atheist and I took great pleasure in talking young Christians out of their faith. I would argue, "Why live by faith? By its very nature, you can't know what you believe is true." The only problem with my philosophy is that it was driving me into a deep depression. I would say, "If there is no creator and judge, and all we are is a product of evolution, why do good? Why be good? Why even be?"

That summer, feeling life was so bleak and depressingly purposeless, I was having a hard time figuring out why I should do anything or talk to anyone. My poor mother was panicking for me as I was slipping into a deeper and deeper funk. I was spending more time alone in my room and I was saying hardly anything to anyone.

I recently asked my mother whether it seemed strange that I went so silent during the infamous summer of 1971.

"It certainly was," said my mom. "You were the most talkative child I had seen in on all of my life."

And Mom was not the type to preach to her kids. But finally, one July day she slipped into my room, Bible in hand and I could see clearly she had a bunch of pages bookmarked.

"I was going to share the scriptures with you," she said.

I never yelled at her before, but I said loudly, "Don't do it. Don't read to me from that book!"

"You became very belligerent," she remembered.

Little demons inside of me were just freaking out.

"Well, I suggested that you could listen to just one scripture," she said.

How did I respond?

"You threw me out of your bedroom," she said.

But my Mom never gave up.

"I just started praying harder than ever," she recalled, looking back on that moment.

At the time I was working at a county agency. It was one of those emergency hotlines that you call when you feel like you are going to commit suicide. And about a week after that wild encounter with my mom, some Jesus People moved into town. They lived in a nearby house. They came over to visit our hotline on a Saturday night. Some hotline workers who knew I hated Christians came running to get me and said, "Paul, there are Jesus Freaks in here."

I ran out and met them on a staircase and yelled, "Get out of here!" But then I looked into their eyes. There was so much love in them and something like the very presence of God. It undid me. I screamed at them and cursed at them and then I actually ran away. Those little demons were hopping around inside me again.

I couldn't stop thinking about those guys and that presence in their eyes. So, the next night, I went over to their place, called The Sonhouse. S-O-N. And I ended up talking to their 21-year-old leader for about three hours. I could hardly understand a word this guy was saying about having a personal relationship with Jesus. But there was an utter peace about him. He set off this prickly itching inside of me that just wouldn't go away.

Five long days passed, the itchiness never stopped and I just couldn't take it anymore. Finally, out on a long walk, I issued a sort of challenge to the universe. I said, "Alright, we are going to settle this once and for all. If there is a God out there, He has until the end of the night to prove himself. If He does, I will give Him my life tonight. After all, if He is the Lord of the universe, I would be a fool not to. It's His universe. But if He doesn't prove himself tonight, then as a good atheist, I am never going to consider getting religious again."

About 9:30 that night I ended up back at the Sonhouse where the Jesus People lived and I shared my challenge with them. I said, "If you can prove God exists, tonight, then you have me. But if you can't, well then, I guess in your eyes, I'm hellbound."

We spent the next two hours and more battling and debating. They tried every argument. I rejected everyone. They kept bringing up the Bible.  I said they couldn't do that because I didn't believe in the Bible.  We went round and round and round. Close to midnight they finally gave up.

They said, "Look, Paul, there is no way that physical beings like us can prove the existence of a spiritual being like God." Then they announced they were going upstairs to bed.

Well, I was desperate. I begged them to keep on debating.

I said, "My eternal soul is on the line, right?"

They just kept walking up the stairs to their bedrooms.

I moved to their front door just bathed in self-pity. It was almost midnight as I began to walk out their doorway into the dark night, remembering my challenge to the universe: God had till the end of this day to prove Himself, or I'd never consider believing again.  Now, though, as I started to cross that threshold, it felt as if I was literally walking into Hell.

But at that very moment on that very threshold, I got the shock and surprise of my young life. Suddenly, seemingly out of nowhere, a Mighty Presence came upon me. It was powerful and terrifying and yet, at the same time, sweet and very appealing, full of peace and love.  And He then spoke in a voice that didn't make a sound and yet was so mighty it boomed in my head.

That voice said, "If you want to know I am real, why don't you just ask me?"

I was scared to death and trembling yet I managed to whisper, "Are you real?"

And it boomed, "I AM!"  It was so powerful, it actually picked me up, spun me around and knocked me back into the house, down to the floor.

And that Presence out in the doorway swept into the room and began to swirl around it.

It was so pure and holy, that all I could feel was the weight of my own dark sin. I was crushed flat to the floor with it. And I shouted out, "Lord, forgive me!  I am sorry!"

And that swirling Presence came down and touched me gently on the back and said, "You are forgiven. You are free."

I began to weep because suddenly my body felt so light, it was like I was floating off that floor.  In gratitude, as I got onto my knees, I began to shout out, "Be my Lord! Be my Lord!"

The Presence said, "Just ask me in."

I said, "Come into my heart."  Then that Presence sweeping around the room shot down my throat and filled my heart. I fell back down to the floor and began to weep and weep.

A few minutes later, the two Jesus People who had gone upstairs came back down, quietly came over to me and placed their hands on my shoulders.  One of them asked, "Paul, would you like to ask the Lord into your heart?"

I replied, "Fellas, what do you think has been going on down here."

Well, that is what happened 50 years ago. About a year later when I was praying alone one day, God's voice returned and He gave me a wonderful prophecy. He said, "I am going to send you to a place called CBN News and you will explore a new form of journalism."

You know, maybe that is what this is.

** Paul Strand is the senior Washington correspondent for CBN News. This article was first published on CBN.com.