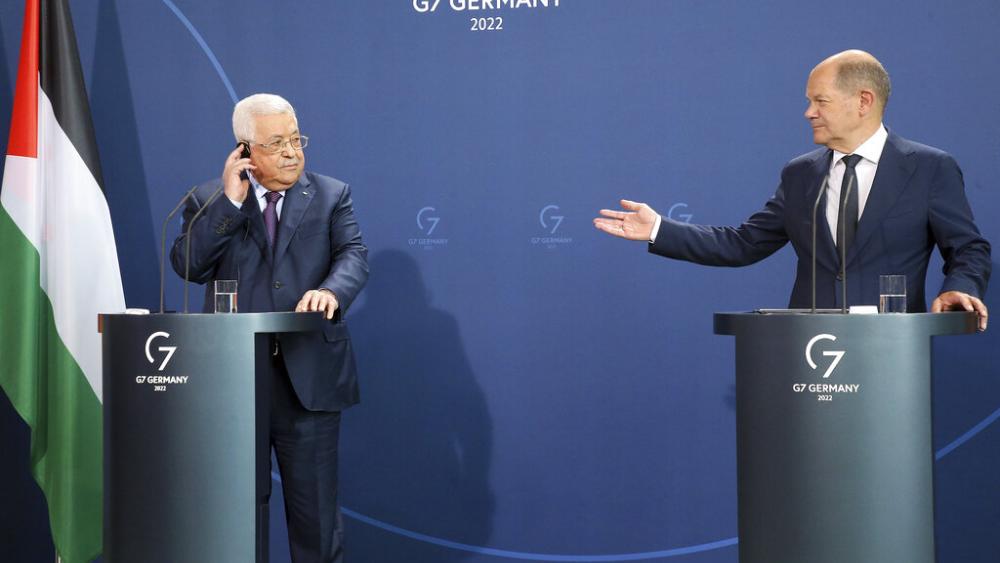 A reporter asked Abbas during a press conference if he would apologize to Israel and Germany ahead of the 50th anniversary of the Munich Olympic Games massacre in 1972, when the Palestinian terror group Black September took Israeli athletes hostage and murdered them. It was believed at the time that the terrorists were linked to Abbas’ Fatah Party.

Instead of apologizing, Abbas said: "If you want to go over the past, go ahead," Abbas replied. “I have 50 slaughters that Israel committed...50 massacres, 50 slaughters...50 Holocausts.”

While Scholz grimaced upon hearing Abbas use the word “Holocaust,” he did not immediately rebuke him despite earlier rejecting Abbas’ claim that Israel was an apartheid state.

Scholz later released a statement saying Abbas’ minimization of the Holocaust is “unacceptable.”

“I am disgusted by the outrageous remarks made by Palestinian President Mahmoud Abbas,” Scholz said in a statement on Wednesday. “For us Germans in particular, any relativization of the singularity of the Holocaust is intolerable and unacceptable. I condemn any attempt to deny the crimes of the Holocaust.”

Israeli Prime Minister Yair Lapid said Abbas’ remarks were not “not only a moral disgrace, but a monstrous lie.”

“Six million Jews were murdered in the Holocaust, including one and a half million Jewish children,” Lapid tweeted. “History will never forgive him.”

“The (Palestinian) leader would have gained sympathy if he had apologized for the terrorist attack on Israeli athletes at the Munich Olympics 1972,” he wrote on Twitter. “Accusing Israel of ‘50 Holocausts’ instead is the most disgusting speech ever heard in the German Chancellery,” he said.