Colorado Guardsman Has 1st Reported US Case of Virus Variant 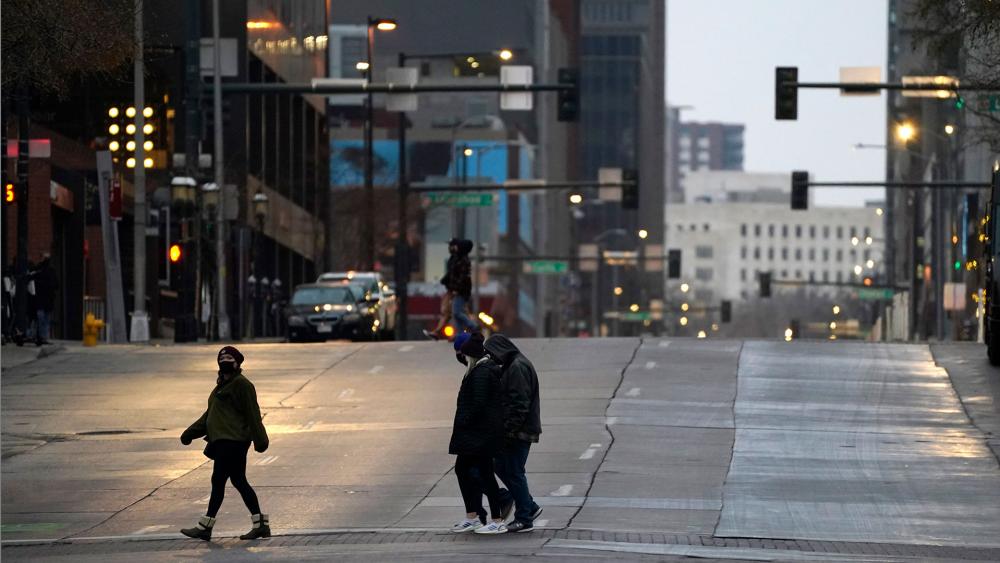 Pedestrians wear masks while crossing an empty road at the intersection of Market Street and 15th Avenue during the evening rush hour Monday, Dec. 28, 2020, in downtown Denver. (AP Photo/David Zalubowski)

DENVER (AP) — A Colorado National Guard member has the first reported U.S. case of a new and seemingly more contagious variant of the coronavirus that has set off an alarm in Britain, while a second case is suspected in another Guard member, health officials said Wednesday.

The two were sent on Dec. 23 to work at a nursing home struggling with an outbreak of the virus in a small town outside Denver, said Dr. Rachel Herlihy, the state’s epidemiologist.

A state laboratory detected the cases after it began looking for signs of the variant after its spread was announced in England earlier this month, she said. Staff and residents at the nursing home who have tested positive for the coronavirus are having their samples screened for signs of the variant, and so far no evidence of it has been found, Herlihy said.

The confirmed case is in a Colorado man in his 20s who hadn’t been traveling and has mild symptoms, officials said. He’s isolating at his home near Denver, and the person with the suspected case is isolating in a hotel on Colorado’s Eastern Plains, Herlihy said.

The cases have triggered a host of questions about how the variant arrived in the U.S. and added urgency to the nation’s vaccination drive.

The new, mutated version was first identified in Britain, where infections are soaring and the number of hospitalized COVID-19 patients has surpassed the first peak seen last spring. The variant has also been found in several other countries.

“There is a lot we don’t know about this new COVID-19 variant, but scientists in the United Kingdom are warning the world that it is significantly more contagious,” Colorado Gov. Jared Polis said. “The health and safety of Coloradans is our top priority, and we will closely monitor this case, as well as all COVID-19 indicators, very closely.”

The discovery of the mutated version overseas led the U.S. Centers for Disease Control and Prevention to issue rules on Christmas Day requiring travelers arriving from Britain to show proof of a negative COVID-19 test.

The variant is probably still rare in the U.S., but the lack of travel history in the first case means it is spreading, perhaps seeded by visitors from Britain in November or December, said scientist Trevor Bedford, who studies the spread of COVID-19 at the Fred Hutchinson Cancer Research Center in Seattle.

“Now I’m worried there will be another spring wave due to the variant,” Bedford said. “It’s a race with the vaccine, but now the virus has just gotten a little bit faster.”

Public health officials are investigating other potential cases of the variant, which was confirmed by the Colorado State Laboratory and conducting contact tracing to determine its spread.

Scientists in Britain have found no evidence that it is more lethal or causes more severe illness, and they believe the vaccines now being dispensed will be effective against it.

British Prime Minister Boris Johnson reported the weekend before Christmas that the variant was moving rapidly through London and southeast England. The region was placed under strict lockdown measures, and dozens of countries banned flights from Britain. France also briefly barred trucks from Britain before allowing them back in, provided the drivers got tested for the virus.

Japan announced a ban Monday on all nonresident foreigners as a precaution.

New versions of the virus have been seen almost since it was first detected in China a year ago. It is common for viruses to undergo minor changes as they reproduce and move through a population. The fear is that mutations will become significant enough to defeat the vaccines.

South Africa has also discovered a highly contagious COVID-19 variant that is driving the country’s latest spike of cases, hospitalizations, and deaths.