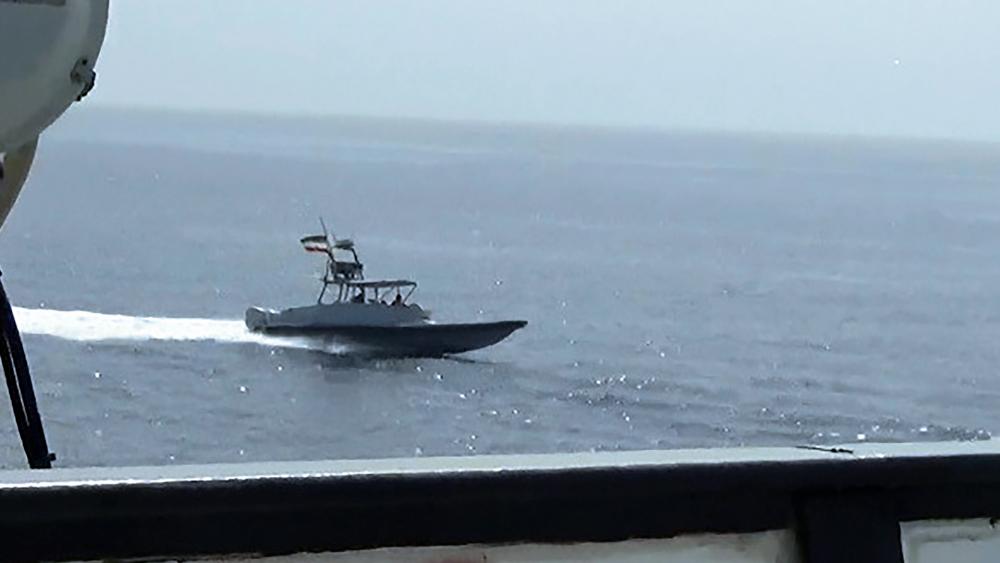 DUBAI, United Arab Emirates (AP) - A U.S. Navy warship fired a warning flare to wave off an Iranian Revolutionary Guard speedboat coming straight at it during a tense encounter in the strategic Strait of Hormuz, officials said Tuesday.

The incident on Monday involving the Guard and the Navy comes as tensions remain high over stalled negotiations over Iran's tattered nuclear deal with world powers and as Tehran enriches uranium closer than ever to weapons-grade levels under decreasing international oversight.

Meanwhile, the United Nations' nuclear watchdog said Iran now plans to enrich uranium through a second set of advanced centrifuges at its underground Fordo facility amid the standoff.

The Cyclone-class patrol ship USS Sirocco and Spearhead-class expeditionary fast transport USNS Choctaw County found themselves in the close encounter with three Iranian fast boats while coming through the Strait of Hormuz to enter the Persian Gulf, the Navy said.

In a video released by the Navy's Bahrain-based 5th Fleet, a high-speed Guard Boghammar is seen turning head-on toward the Sirocco. The Sirocco repeatedly blows its horn at the Boghammar, which turns away as it closes in. The flare shot can be heard, but not seen, as the Boghammar passes the Sirocco with the Iranian flag flying above it.

The Navy said the Boghammar came within 50 yards (45 meters) of the Sirocco, raising the risk of the vessels running into each other. The overall encounter lasted about an hour, the Navy said.

The Guard's "actions did not meet international standards of professional or safe maritime behavior, increasing the risk of miscalculation and collision," the Navy said.

Iran did not immediately acknowledge the incident in the strategic waterway - a fifth of all traded oil passes through the strait.

The Navy separately told The Associated Press that this marked the second so-called “unsafe and unprofessional” incident it had with Iran in recent months.

On March 4, three Guard ships had a tense encounter for over two hours with Navy and U.S. Coast Guard vessels as they traveled out of the Persian Gulf through the strait, the Navy said. In that incident, the Guard's catamaran Shahid Nazeri came within 25 yards (22 meters) of the USCGC Robert Goldman, the Navy said.

The Navy did not elaborate on why it did not announce the previous incident, particularly since a larger vessel came even closer to an American warship. However, that was just as a deal in Vienna between Iran and world powers on restoring the nuclear deal looked possible, before the talks broke down.

Talks in Vienna about reviving the deal have been on a “pause” since March. Since the deal’s collapse, Iran has been running advanced centrifuges and rapidly growing stockpile of enriched uranium. Earlier this month as well, Iran removed 27 surveillance cameras of the U.N.'s International Atomic Energy Agency. The agency's head warned it could deal a “fatal blow” to the nuclear deal.

On Tuesday, the IAEA said its inspectors verified Iran was preparing to enrich uranium through a new cascade of 166 advanced IR-6 centrifuges at its underground Fordo facility. Already, Iran has one cascade of IR-6s operating at Fordo, near the holy Shiite city of Qom, some 90 kilometers (55 miles) southwest of Tehran. They enrich up to 20% purity.

The IAEA said Iran has not told it yet the level at which the second cascade will be enriching. Iran has yet to publicly acknowledge the new cascade.

The 2015 nuclear deal prohibited all enrichment at Fordo. Shielded by mountains, the facility is ringed by anti-aircraft guns and other fortifications. It is about the size of a football field, large enough to house 3,000 centrifuges, but small and hardened enough to lead U.S. officials to suspect it had a military purpose when they exposed the site publicly in 2009.

Amid the tensions, Israel is suspected of carrying out a series of attacks in and outside of Iran targeting the country, including the killing of the architect of its one-time military nuclear program with a remote-controlled machine gun.

On Tuesday, the state-run IRNA news agency quoted the prosecutor of Iran's southeastern Sistan and Baluchistan province as alleging three people arrested in April there on suspicion of working with Israel's Mossad intelligence agency wanted to kill Iranian nuclear scientists.

It's unclear why the three would have been in Sistan and Baluchistan, which has no nuclear sites. The restive province that borders Afghanistan and Pakistan faces sporadic attacks from armed insurgent groups.

Meanwhile, a Guard brigadier general acknowledged that a fatal May explosion at a weapons development facility in Parchin, east of Tehran, came from “industrial sabotage.” Mohammadreza Hassani Ahangar, the head of the Guard's Imam Hossein University, said in comments quoted Monday night by a state TV affiliate that an unnamed enemy launched the sabotage that killed an engineer and wounded another worker amid the suspected Israeli assaults.