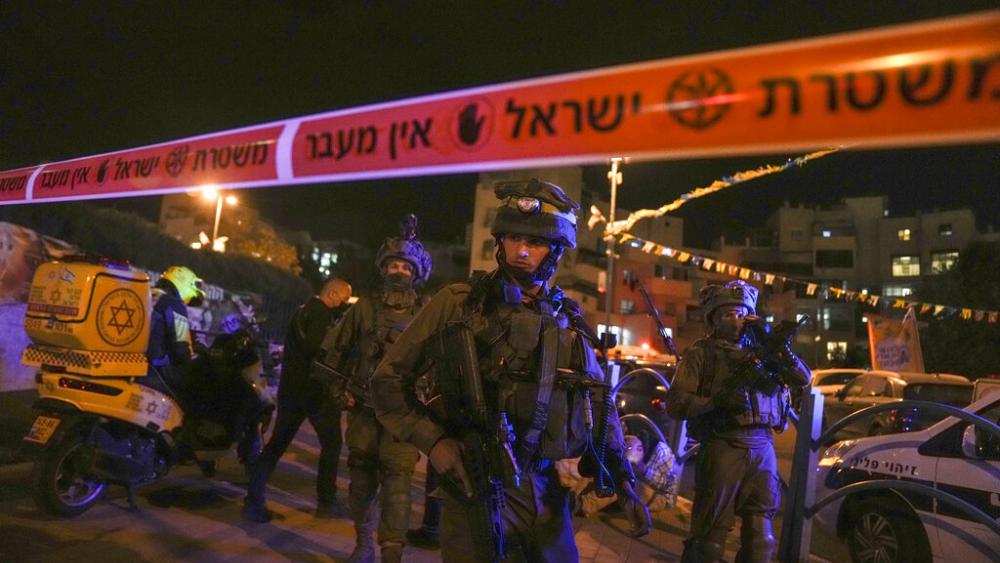 Israeli forces secure the area of a stabbing attack in the town of Elad, Israel, Thursday, May 5, 2022. (AP Photo)
6305703995112
Terrorists Murder 3 Israelis Using Hatchets and Knives, Palestinians Celebrate with Sweets

JERUSALEM, Israel – A  pair of Palestinians killed three people in a terror attack in central Israel on Thursday night while Israelis were celebrating Independence Day.

Police are looking for two suspects who they say killed three people and injured four others using hatchets and knives in the ultra-orthodox city of Elad near Tel Aviv. Authorities have identified As’ad Alrafa’ani, 19, and Sabhi Abu Shakir,20, – both from the West Bank town of Jenin – as the suspected terrorists.

“We’ll put our hands on the terrorists and their collaborators, and they will pay the price. I send my condolences from the depth of my heart to the families of the murdered,” Bennett says.

The three men killed in the attack were identified as Boaz Gol, Oren Ben Yiftah, and Yonatan Havakuk. Together, they leave behind a total of 16 children.

U.S. Secretary of State Antony Blinken “vehemently” condemned the terror attack. “This was a horrific attack targeting innocent men and women, and was particularly heinous coming as Israel celebrated its Independence Day,” he said in a statement.

“The killing of Palestinian and Israeli civilians only leads to a further deterioration of the situation at a time when we all strive to achieve stability and prevent escalation,” Abbas said.

Palestinian terror groups praised the attack, but none of them immediately claimed responsibility.

Hamas called it  “a heroic operation,” and said it was in response to Jews visiting the Temple Mount earlier on Thursday.

“Our people will continue their struggle and their defense of the Al-Aqsa Mosque with every means. Their blows will strike the Zionists and the settlers wherever they are,” said Hamas spokesperson Abd al-Latif al-Qanou.

For weeks, tensions have been boiling in Jerusalem at the Al-Aqsa Mosque compound located on the Temple Mount – Judaism’s holiest site and the third holiest site in Islam. Muslim rioters have repeatedly clashed with Israeli police, threatening to set off a broader conflict with Palestinian terror groups in the Gaza Strip.

Israel is currently facing a wave of Palestinian terror attacks that have killed 19 Israelis.

In a recent speech, Hamas leader Yahya Sinwar threatened a “religious war” and called on Palestinians in the West Bank – biblical Judea and Samaria –  to attack Israelis.

“Our people must prepare for a great battle if the occupation does not cease its aggression against the Al-Aqsa Mosque,” Sinwar said during a speech in Gaza.

Palestinians in Gaza handed out sweets Thursday in celebration of the attack.