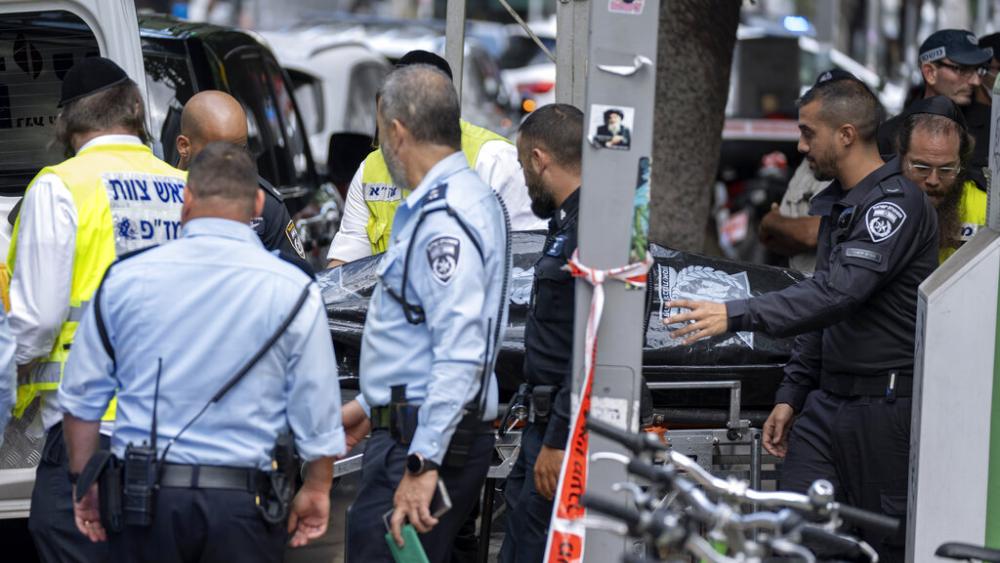 Israeli police remove the body of Palestinian Musa Sarsour after he allegedly killed an 84-year-old Israeli woman and then hung himself, in Tel Aviv, Israel, Wednesday, Sept. 21, 2022. (AP Photo)

JERUSALEM, Israel – Israeli authorities allege that Mousa Sarsour, 28, from the West Bank city of Qalqilya died from an apparent suicide after killing Shulamit Rachel Ovadia in a terror attack. District police chief Haim Bublil said Sarsour was found hanged in an abandoned building in Tel Aviv Wednesday morning. Bublil said Sarsour had been stopped by police but was let go after he showed his valid permit to work in Israel.

The Israel Defense Forces said they arrested five suspects in the town of Sartah believed to be involved in the attack.

Sarsour’s work permit allowed him to work at a construction site near Ovadia’s home in Holon, just south of Tel Aviv the Ynet news site reported. Footage obtained by the police appears to show a man in dark clothes approaching the elderly woman from behind and striking her in the head before running off on Tuesday. Ovadia died of her injuries.

“We have no idea what happened. We are in shock,” Ovadia’s son-in-law told Israel’s Channel 13 news. “She was probably in the wrong place at the wrong time.”

Sarsour did not have any prior security offenses against him at the time of Ovadia’s murder.

An unnamed relative told Ynet Sarsour had mental health issues and his family does not believe he carried out the attack.

“Mousa is a very shy and quiet person – he hardly even talks to his family members. There are things we don’t understand and we will wait for the results of the investigation,” the relative said.

Israeli Prime Minister Yair Lapid, who was in New York for the United Nation’s General Assembly, called Ovadia’s killing a “shocking attack by a despicable and cowardly terrorist.”

Israeli authorities have warned about a potential surge in Palestinian terrorism ahead of the Jewish holidays, which begin with Rosh Hashana on Sunday and end with Simchat Torah on Oct. 17.

Israel has carried out frequent raids in Palestinian areas of the West Bank – biblical Judea and Samaria – in response to a terrorism wave that killed 19 people.