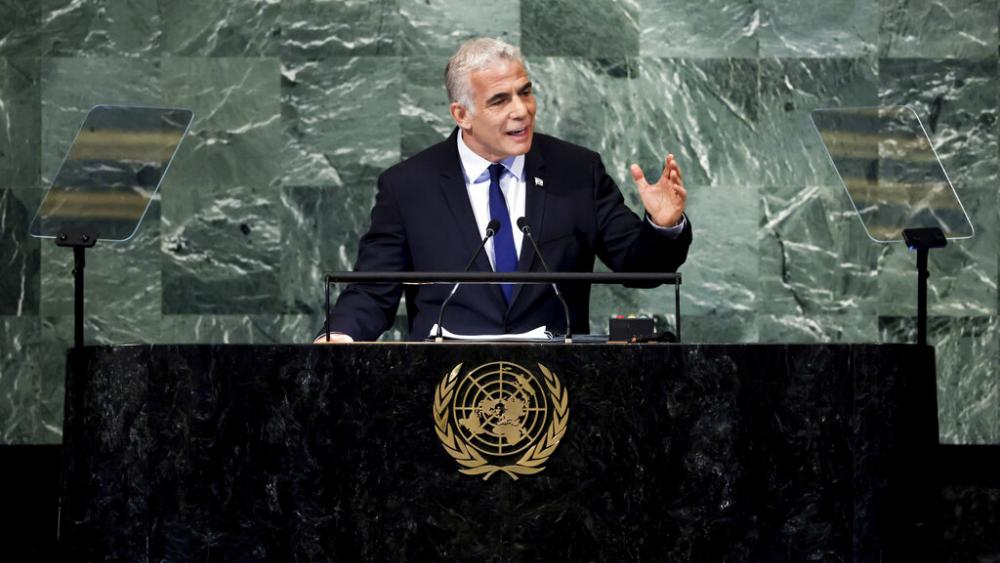 JERUSALEM, Israel – For the first time in more than a decade, an Israeli prime minister has re-committed to a two-state solution with the Palestinians. But his comments didn’t sit well with many Israelis.

Lapid told the UN General assembly that Israel’s economic and military strength enables it to strive for peace with the Arab world, including the Palestinians.

“An agreement with the Palestinians, based on the two states for two peoples, is the right thing for Israel's security, for Israel's economy and for the future of our children,” he said.

Lapid sees peace not as a compromise or weakness but as a courageous decision. Israel, he says, has one condition: “that a future Palestinian state will be a peaceful one; that it will not become another terror base from which to threaten the well-being and the very existence of Israel.”

Even before the speech, Lapid’s coalition predecessor as prime minister, Naftali Bennett blasted the rumored announcement, writing on Facebook that “there is no place or logic to raise the idea of a Palestinian state.”

“We have elections coming up in only a few weeks from today, and I haven’t seen even one party, including Lapid’s party – Yesh Atid – mentioning the idea of two states,” Danon said. So, it’s not on the table. Nobody’s discussing it.  And we know there is no real partner on the Palestinian side today,” he added.

In his UN speech, even Lapid acknowledged what Palestinians did after Israel made territorial concessions, referring to the nation’s 2005 unilateral withdrawal from the Gaza Strip. In less than a year, Hamas, a murderous terror organization, came to power.

They destroyed the greenhouses and replaced them with terrorist training camps and rocket launch sites.

“Since we left Gaza, over 20,000 rockets and missiles have been fired at Israel. All of them at civilians. All of them at our children,” he reminded the General Assembly.

Referring to Iran, the prime minister accused the Islamic regime of conducting an “orchestra of hate” against Israel and elsewhere.

“They hate and kill Muslims who think differently, like Salman Rushdie and Mahsa Amini. Their hate is a way of life. It is a way to preserve their oppressive rule,” Lapid warned.

He also pointed out Iran is the only U.N. Member bold enough to openly say it wants to destroy another member.

“Iran has declared time and time again that it is interested in the ‘total destruction’ of the State of Israel. And this building is silent,” he said.

Lapid added that if Iran gets a nuclear weapon, he believes it would use it.

“The only way to prevent Iran from getting a nuclear weapon, is to put a credible military threat on the table,” Lapid said.

Danon says that while Lapid touched on all the right points, he didn’t go far enough.

Earlier, Israel’s Ambassador Gilead Erdan walked out of the General Assembly during Iranian President Ebrahim Raisi’s speech, displaying a picture of the Holocaust victims in his family.

Erdan tweeted: “A murderer like #raisi who denies the holocaust, (amongst many human rights violations) has 0 [zero] place on the world stage. He asked for proof…here are my Auschwitz surviving grandmothers. The ambassadors in the GA: leave his speech. A dictator deserves no voice.”