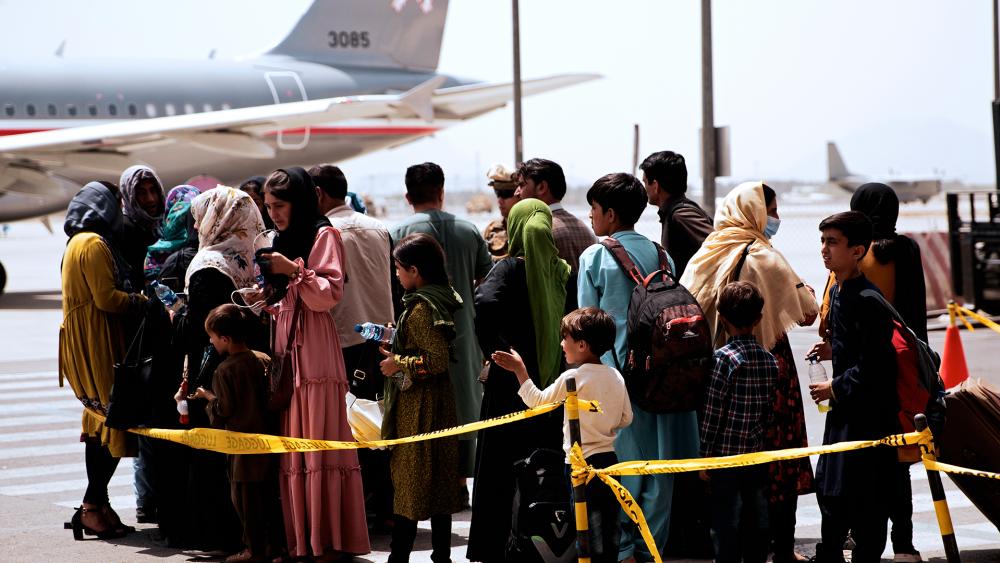 In this photo provided by the U.S. Marine Corps, civilians prepare to board a plane during an evacuation at Hamid Karzai International Airport, Kabul, Afghanistan, Wednesday, Aug. 18, 2021. (Staff Sgt. Victor Mancilla/U.S. Marine Corps via AP)
6268674858001
'The United States Gave Our Word to People': Calls Grow to Protect Afghans Who Helped U.S. Fight

With thousands of refugees still in Afghanistan fearing for their lives, more than a dozen U.S. governors on both sides of the aisle say their states are ready to welcome and help resettle the evacuees.

About 5,200 U.S. troops are currently in Afghanistan helping to secure Kabul's airport and safely evacuate more people. The State Department announced Thursday that 6,000 evacuees have been processed and will soon be airlifted out of the country.

The Pentagon says 12,000 American citizens, embassy personnel, and people with special immigrant visas, or SIVS, have been moved out of Afghanistan since the end of July, and they're scheduling more aircraft departures to get qualified people out as soon as possible.

"We intend to maximize each plane's capacity, we're prioritizing people above all else," declared Maj. Gen. Hank Taylor, the deputy director of the Joints Chiefs of Staff at a press conference Thursday.

But even for Americans and allies with the right paperwork, getting into the airport is dangerous. Reports continue of the Taliban beating those desperate to flee and firing gunshots into the crowds trying to reach the U.S.-controlled entry gates.

As the world watches the humanitarian crisis unfold, former Trump advisor Stephen Miller raised the question to Fox News anchor Laura Ingraham if the U.S. should be resettling large numbers of Afghan refugees.

"Those who are advocating mass Afghan resettlement in this country are doing so for political, not humanitarian reasons," claimed Miller. "It is extraordinarily expensive to resettle a refugee in the United States

"Resettling in America is not about solving a humanitarian crisis, it's about accomplishing an ideological objective to change America," Miller continued.

"First of all, I don't give a rip what Stephen Miller has to say about anything," he said. "The significant point is here the United States gave our word to people, and the United States has to be the kind of nation that keeps our word."

"We've resettled three million refugees since the Refugee Act was signed into law in 1980, and not a single one has taken the life of an American in a terrorist attack," he explained.

Soerens argues there is a strict, extensive vetting process for those coming to America.

Soerens also pointed out that the people coming in right now are those whose lives are at risk because of their service to the United States. He also encourages people to work with organizations like World Relief to help these allies find safety and a new start.