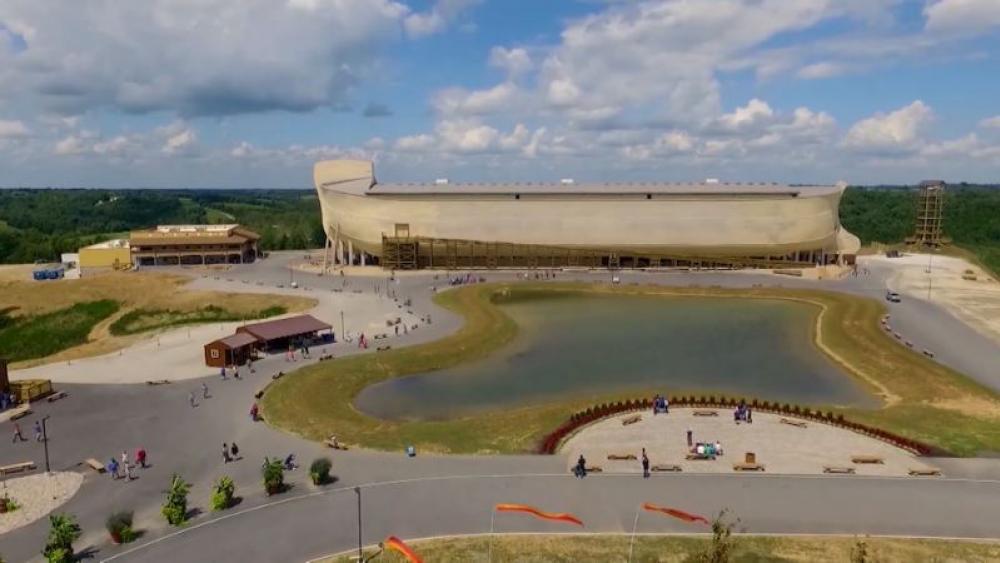 WILLIAMSTOWN, Ky. — Did you ever wonder if Noah's Ark could really have been big enough to keep all those animals safe from the biblical flood?  When you stand next to an actual accurate reproduction of the Ark, it may cause any doubts to fall away.

Millions of people have flocked to central Kentucky's Ark Encounter in Williamstown since it opened in 2016.

These Are the Dimensions from Genesis

Patrick Kanewske, who served as the attraction's media and ministry relations director, chatted up the wonders of the Ark with CBN News and a number of guests as he guided us around and through the big, big boat.

The exact length, width, and height are what they see, Kanewske assured, saying, "It's the biblical proportions. These are the dimensions from Genesis."

One amazing revelation -- expert nautical engineers who were brought in as consultants found as they studied God's design for the Ark that it was absolute perfection.

"We all know that God's the Great Designer. He's the Great Engineer," Kanewske said. "It's the perfect dimensions for seaworthiness, weight distribution, smoothness of ride."

But how could a man like Noah living in the ancient world actually solve all the engineering problems of building what amounts to a 10-story high vessel that's many times longer than that?

"They were pretty smart people back then. You have to figure Noah was in his 500s when he was building his Ark. So he was pretty smart," Kanewske insisted.

CBN News first visited the Ark Encounter in February 2016 when it was pretty much a huge rectangle without a bow or stern and hardly anything inside.

There Are Even Dinosaurs on the Boat

Now, the 10-story-high vessel is crammed with more than a hundred exhibits and stuffed with animals in their flood-time cages.

It includes many dinosaurs since the creators of Ark Encounter contend those creatures still existed during the time of man.

But how could such monstrous animals fit in the boat?  Kanewske suggested God would have brought young ones aboard that weren't yet fully grown.

"God brought the animals, right? God's pretty smart. He probably would have brought adolescents," he explained.

A cutaway model showing inside the Ark reveals how they all could have fit.

Guests aboard the Ark Encounter can also ask Noah himself about such things since he answers questions.  Animatronic versions of his entire family are also on-board.

Sitting in his "office," the model of the famous biblical character says things like, "It really wasn't hard to find the animals since God brought them right to me. Just as He said He would. God's timing is perfect. And He always keeps His promises."

Noah's family teaches a great lesson in racial harmony, reminding visitors, that no matter their color, everyone on Earth is a descendant of Noah -- all just one human race.

Pointing to the models of the family spread around the Ark, Kanewske said, "And from these eight people actually comes the rest of us here in the world."

The exhibits also show human history from the time of perfection in the Garden of Eden. Then illustrate the downward spiral as sin, death, and destruction came into the world -- bringing humanity finally to a time of judgment and the biblical flood.

The Ark Encounter also shares with visitors the hope that Jesus Christ's life, death, and Resurrection bring mankind.  The main door to the attraction is lit up on the inside with Christ's cross

"It's a metaphor if you will for salvation…safety," Kanewske pointed out.

That's just one lesson guests receive while moving through the largest timber-frame structure in the world.

"Some people have equated it to the Eighth Wonder of the Modern World," Kanewske noted.

* This report was first published in 2019, but good news is worth repeating.