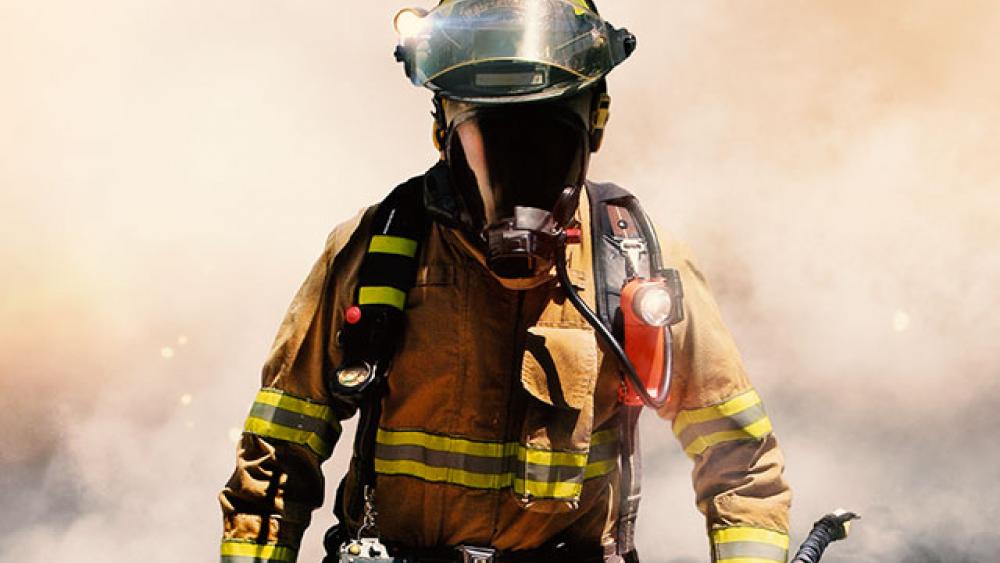 Imagine plunging into a raging inferno and immediately finding yourself trapped in its raging flames with no immediate escape from the searing temperatures.

That was reality for Los Angeles Fire Department Captain Cheyane Caldwell when a 2007 call to aid a burning building nearly claimed his life.

LISTEN: HEAR THE “JESUS IS ALL WE NEED” PODCAST

“There’s no way I should have survived,” Caldwell recently said while sharing his incredible survival story on the premiere episode of Edifi’s “Jesus Is All We Need” podcast. “Nobody expected me to survive.”

Caldwell was forever changed on July 24, 2007, a day that now “lives in infamy” for him. It all began with an event known as the “Adams fire,” a one-story structure fire in California that became a defining point in his life.

Listen to Caldwell explain the miracles that he believes saved him from the blaze:

When Caldwell and his team arrived at the fire, it was evident the blaze was quicking spinning out-of-control. As he got on the roof to assess the situation, that’s when the unthinkable happened.

“I stepped over this division wall and ... I fell through the decking into the structure fire and fell about 13 [or] 15 feet into the structure,” he said. “A ball of fire came out the hole I created, so you can imagine what was underneath me.”

As the flames continued to engulf the building, Caldwell remembers waking up on the ground in the midst of sweltering heat, with the blaze quickly closing in and with no immediate exit.

“I thought three things in my mind clear as day: ‘Okay Lord, I’m in here all by myself,’” he recalled. “Second, ‘Lord, this is it. I’m ready’ — and lastly, my life just went before me all on a DVD in fast order.”

The immense pain Caldwell felt in those moments was unbearable, as he compared the intensity to “putting your hands in the oven and just letting them burn.”

While Caldwell in those moments assumed it was the end, he now believes God had other plans. As the death-defying moments wore on during an excruciating 7 minutes and 10 seconds inside the blaze, Caldwell’s captain made a surprising decision.

He directed firefighters on the roof to put a hoseline down the hole and blast water inside. The captain believed Caldwell was dead, but wanted his family to be able “to have an open-casket funeral.” That act of mercy, though, ended up being a life-saver.

“What he did was like water from heaven,” Caldwell said, noting that the intense burning he felt was immediately “stopped … in its tracks.”

Against all odds, Caldwell was rescued, survived and remarkably returned to his job within 10 months. He has since shared his story with hundreds of thousands of people through interviews and a popular film from The Billy Graham Evangelistic Association.

Caldwell openly credits God for his survival, explaining that “miracles just kept happening” during the ordeal. Even the fall into the building could have been deadly due to sharp spikes on some of the fencing inside, yet he narrowly missed the spikes and a cage broke his fall.

Caldwell added, “I truly believe he held me in the palm of his hand … it’s real, he loves us.”

SUBSCRIBE: LISTEN TO THE ‘JESUS IS ALL WE NEED’ PODCAST ON YOUR FAVORITE PLATFORMS

Then there’s the water hose. Caldwell’s captain, who wasn’t a Christian at the time of the blaze, recalled feeling as though God told him to make that surprising call. The captain later explained, “It was like God was speaking to me … God told me to take this hoseline and put it in the hole.”

Caldwell offered a message to anyone listening who might be facing questions or struggles of their own: “Prayer works.” He also affirmed that God always has a plan and purpose.

“There’s no reason I should have survived, but I … give all glory to my Lord and Savior Jesus Christ for what he did on that day.” Caldwell concluded. “There’s no luck involved, there’s no coincidence — it’s all providence, and providence is defined as God’s hand at work for a later activity or mission.”

Listen to Caldwell’s incredible story in the premiere episode of Edifi’s “Jesus Is All We Need” podcast.