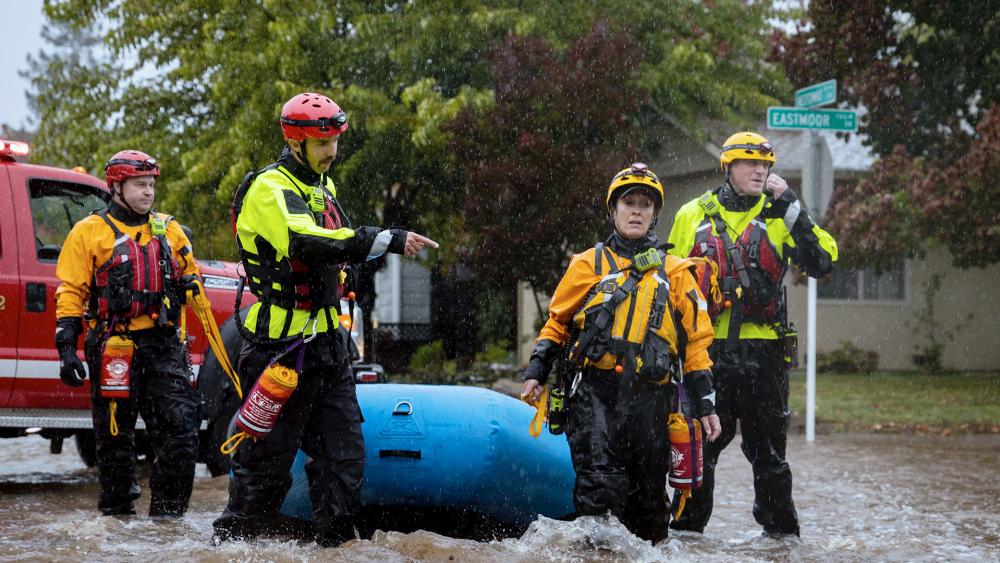 A day after the West Coast saw record storms while a cluster of tornadoes struck the Midwest, the first nor'easter of the season is taking aim along the East Coast packing up to 8 inches of rain and winds up to 60 miles per hour.

New York and New Jersey have already declared states of emergency, and flash flood watches are in effect from the New Jersey Shore to Boston.

AccuWeather meteorologist Bernie Rayno said it starts with "heavy rain this morning across northern and central New Jersey.  This storm will really start to strengthen and that's where we're going to have even more extreme impacts, especially in New England and across the Boston area."

New York City officials are urging those living in basements to be on alert after 11 people died in flooded basements last month during Hurricane Ida.

Today's storm comes after a historic "atmospheric river" slammed into the West Coast, sending mud, trees, and boulders crashing down into one California highway.

In the Bay Area, a truck was blown onto its side on the Richmond-San Rafael bridge and neighborhoods were underwater.

Resident Trevor Stines said, "My whole garage is up to my knee caps. Everything is floating around."

Elsewhere, parts of I-80 had to be shut down because of heavy snow.

The coast of Washington state saw its strongest storm on record.

The Midwest was also feeling nature's wrath.
In Chicago, winds from a separate system created 12-foot waves on Lake Michigan.

That storm dropped at least 13 tornadoes in Missouri and Illinois, one of which destroyed John and Jo-Ellen Duncan's home northeast of Kansas City.

John Duncan said, "We have a basement but there wasn't time. Once you see the tornado, there's not time to run to the basement. If we had tried we probably would have been killed."

But the good news for Californians is water –  large volumes of water much-needed after the summer drought. The Lake Oroville reservoir in northern California has risen more than 20 feet.