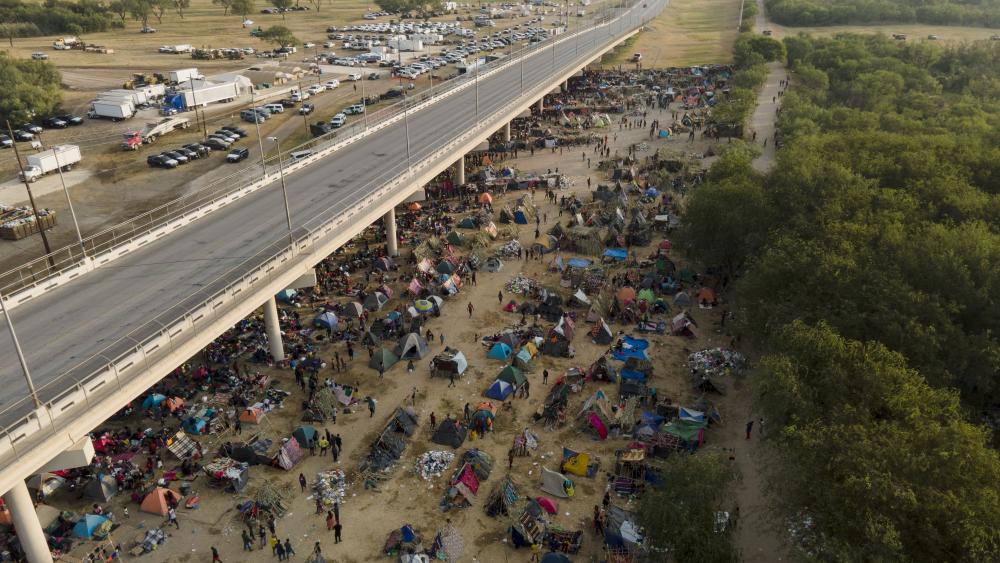 Migrants, many from Haiti, are seen at an encampment along the Del Rio International Bridge near the Rio Grande, Tuesday, Sept. 21, 2021, in Del Rio, Texas. (AP Photo/Julio Cortez)
6273710155001
Biden Admin Says It's Sending Bridge Migrants Back to Haiti, but Thousands Actually Being Released Into US

The Biden administration is struggling to get control of the escalating crisis at the border as bipartisan criticism of its handling of the problem intensifies. The stunning video of 10-15,000 migrants detained under a bridge went viral earlier this week, exposing the latest incident.

10,503 illegal aliens are under this bridge tonight because Joe Biden made a political decision to cancel deportation flights to Haiti.

The Border Patrol is overcapacity. It’s indefensible, it’s inhuman, and it was entirely caused by Biden & Harris. #BidenBorderCrisis pic.twitter.com/LmWV52nmJc

"Senator I would be pleased to provide you with that data," replied Mayorkas.

"I want them now - why don't you have that information now," pressed Johnson.

More than 14,000 migrants have surged the border in just one spot in Texas over the past week. Many are from Haiti, fleeing massive earthquake devastation and political violence. They've been rounded up into an outdoor detainment camp under a bridge.

The Haitian migrant crisis comes as the border has already been swamped by the highest number of migrants in 20 years, reaching over 200,000 in both July and August.

Thousands seeking asylum under a Texas bridge have already been sent back to their home countries, but now comes news that many of them are being released into the U.S.

The Biden administration believes it can process remaining migrants by the end of the week.

But according to the Associated Press, two officials say many Haitian migrants are being allowed to continue on into the U.S., undercutting the Biden administration's public statements that the thousands in the camp faced immediate expulsion.

Haitians have been freed on a "very, very large scale" in recent days, according to one U.S. official who put the figure in the thousands. The official, with direct knowledge of operations who was not authorized to discuss the matter and thus spoke on condition of anonymity.

Many of those released have faced minimal processing and have simply been told to appear at an immigration office within 60 days.

Both Democrats and Republicans are critical of the White House's handling of the crisis after images of U.S. Border Patrol agents on horseback using whips and aggressive tactics went viral this week.

"The policies that are being enacted now — and the horrible treatment of these innocent people who have come to the border — must stop immediately," Senate Majority Leader Chuck Schumer (D-NY) told the Senate on Tuesday.

Border agents defend their actions, calling them part of their training.

The president promised to fix the situation, saying Tuesday, "We will get it under control."

For now, at least 10,000 men, women, and children are still encamped under the Del Rio International Bridge.