Heroic Homeless Man Gets Emotional After Pulling Cop From Burning Car. And the Story Has Another Major Twist 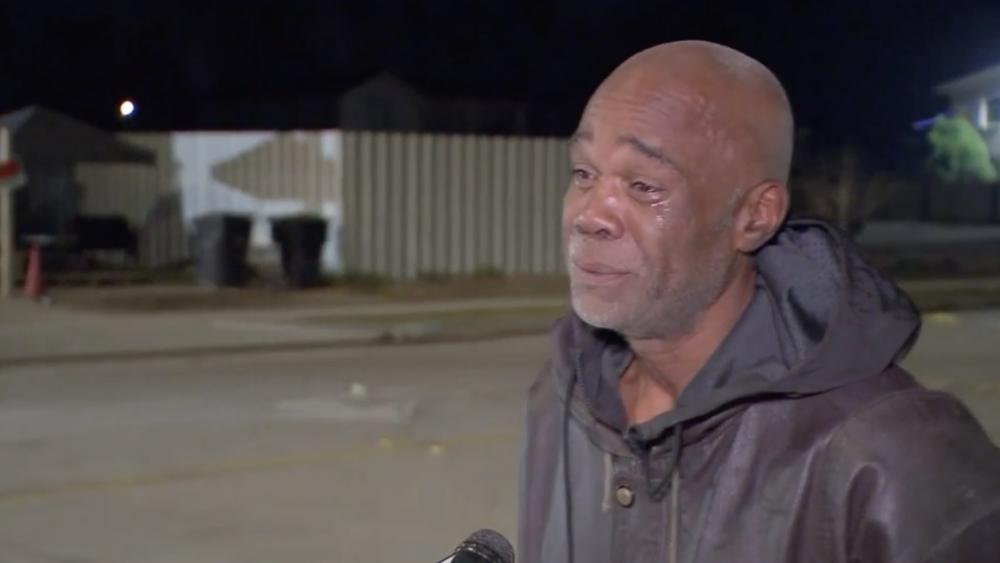 A homeless Texan who selflessly helped victims of a car accident said his “instincts” led him to take action. Now, Johnny Walker is being showered with praise and thanksgiving.

His powerful actions came after a Harris County Sheriff’s deputy, who was chasing a robbery suspect on Wednesday night, got into an accident with another vehicle. Then, five other cars were caught up in the chaos.

Tragically, not everyone survived. One woman died and now two children — a 5-year-old and a 2-year-old — and the cop are hospitalized. Three other adults also sought medical care, according to KTRK-TV.

Walker, who was reunited with his family after media coverage of this story, believes he was “at the right place at the right time” and teared up while speaking with a reporter about what unfolded.

“I’m homeless. I was doing some work for someone. I was taking some tools back when I heard ‘boom, boom, boom, boom, boom,'” Walker told the outlet. “I ran out here to see what it is and I saw a lot of cars, but I paid attention to the fire. My instincts were to go to that car and help him out because he was crushed in on both sides.”

Walker said he tried to help the woman who died but to no avail. When he saw the officer’s car was ablaze and feared it would explode, he said he knew he had to do something.

“Sometimes, you have to make a choice,” Walker said. “That car was on fire. I could lose my life.”

He described jumping over the car and working with others to pull the officer out of the vehicle and get him to safety inside a nearby store.

Even after saving the day, Walker was still thinking about others as he reflected on all that unfolded.

“I’m just disappointed we couldn’t help someone else,” he said. “I’m just thinking about them little kids.”

Harris County Sheriff Ed Gonzalez said he and other officers are praying the injured deputy fully recovers. He also offered invocations for the deceased woman’s family and the children involved in the accident.

But the rescue isn’t the end of the story. As it turns out, Walker’s family had been searching morgues and hospitals for him. He has reportedly been homeless for years and was believed to have potentially been stabbed to death.

An incredible silver lining to an awful story. Johnny Walker has been homeless for years. His family was told he may have been killed in a stabbing. They’ve been searching daily.. but then saw him on the news this morning! He helped rescue the deputy from the burning car. @KHOU pic.twitter.com/S4urXG9Cwa

But after he appeared on TV talking about the rescue, his family recognized him and was overjoyed to reconnect. It was a development KHOU-TV reporter Janelle Bludau called a “silver lining.”

“When we got to him, he was just really upset that he couldn’t help the lady,” Monica Collins, Walker’s sister, told KHOU-TV.

Walker’s sister launched a GoFundMe to help her brother get back on his feet. The effort, which has raised over $6,000, is intended “to help him find resources for counseling and a home.”