'May the Lord Be Near the Brokenhearted': Horror, Heartache and Heroism in Texas School Massacre 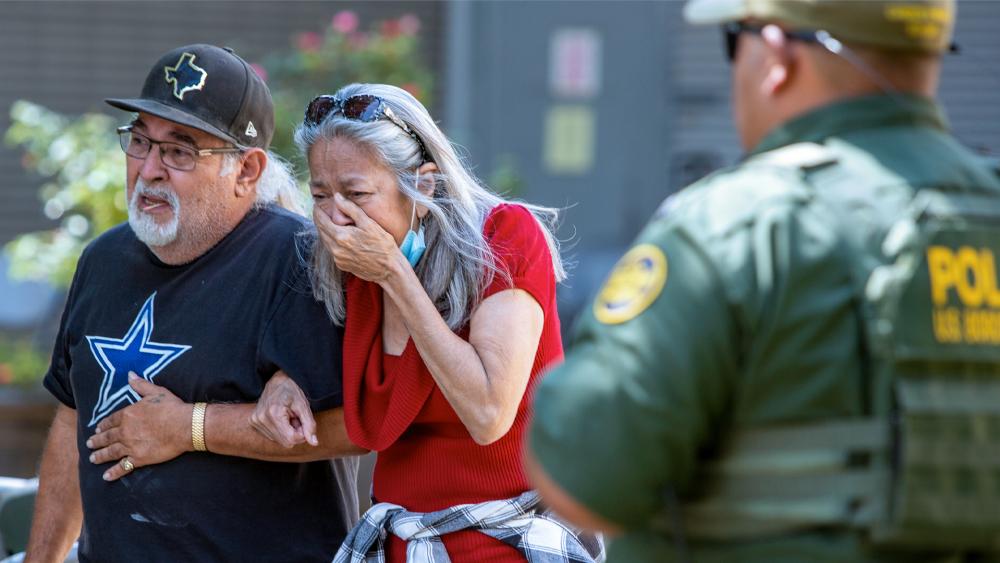 A woman cries as she leaves the Uvalde Civic Center, May 24, 2022, in Uvalde, Texas. An 18-year-old gunman opened fire at a Texas elementary school, killing 19 children and 2 teachers (William Luther/The San Antonio Express-News via AP)
6306781855112
'May the Lord Be Near the Brokenhearted': Horror, Heartache and Heroism in Texas School Massacre

Shock and grief have gripped the community of Uvalde, Texas after the mass killing of 19 little children at Robb Elementary School Tuesday.

Last night, families gathered at a local civic center waiting and hoping to hear their children are safe.

A line of hearses waited outside the school Tuesday night to carry off the victims killed just days before the end of the school year.

Nineteen students in grades 2 through 4 and two teachers were murdered when an 18-year-old shooter opened fire inside the school. Authorities said he was wearing body armor and had several guns before he was shot and killed by police.

"It's believed that he abandoned his vehicle and entered into the Robb elementary school in Uvalde with a handgun and he may have also had a rifle," said Texas Gov. Greg Abbott (R).

Stories of heroism are emerging, including those of fourth-grade teachers Eva Mireles and Irma Garcia who died trying to protect their students.

Also, a U.S. Border Patrol agent is said to have rushed to the scene and into the school without backup and killed the shooter.

Jordan Liges, a student who survived the shooting described the horror of what happened.

"We just hear all kinds of gunshots going off, like nonstop, like constantly, gunshots. And then we're over here all scared, on the ground fearing for our lives," Liges told a local news outlet.

Hours after the attack, families waited at the town civic center for word about their children. The silence was broken repeatedly by screams and wailing. “No! Please, no!” one man yelled as he embraced another man.

The massacre marks the deadliest school shooting since the Sandy Hook tragedy that left 26 dead in December 2012.

President Joe Biden addressed the nation Tuesday night to offer his condolences and to offer prayers for the families of the victims.

"May the Lord be near the brokenhearted and save those crushed in spirit 'cause they're gonna need a lot of help and a lot of our prayers," the president said.

He also urged lawmakers to act now to prevent the next mass shooting attack.

"It's time to turn this pain into action," he said. "As a nation, we have to ask, 'When in God's name are we going to stand up to the gun lobby? When in God's name will we do what we know in our gut needs to be done?"

The violence comes less than two weeks after 10 people were killed at a supermarket in Buffalo.

Christian leaders are asking for prayers for the families of the victims in Uvalde.

Texas Pastor John Hagee, whose San Antonio church is about 85 miles away from the school tweeted: "There are no words to express the heartache of today's loss of precious innocent lives. Our prayer is that the God of all comfort will wrap his healing hands around the broken hearts and shattered lives of these parents and family members."

There are no words to express the heartache of today’s loss of precious innocent lives. Our prayer is that the God of all comfort will wrap His healing hands around the broken hearts and shattered lives of these parents and family members. ~Pastor John Hagee & Pastor Matt Hagee pic.twitter.com/Qoo8EYiE8V

Authorities say before heading to the school, the shooter shot his grandmother. She survived and is being treated at a local hospital.

Meanwhile, in the aftermath of this shooting, there are growing calls for more law enforcement in public schools, as well as mental health counselors.