'A Fire that Will Spread:' Bishop Jakes' Woman Thou Art Loosed Changes Hands, Paving Way for Something New 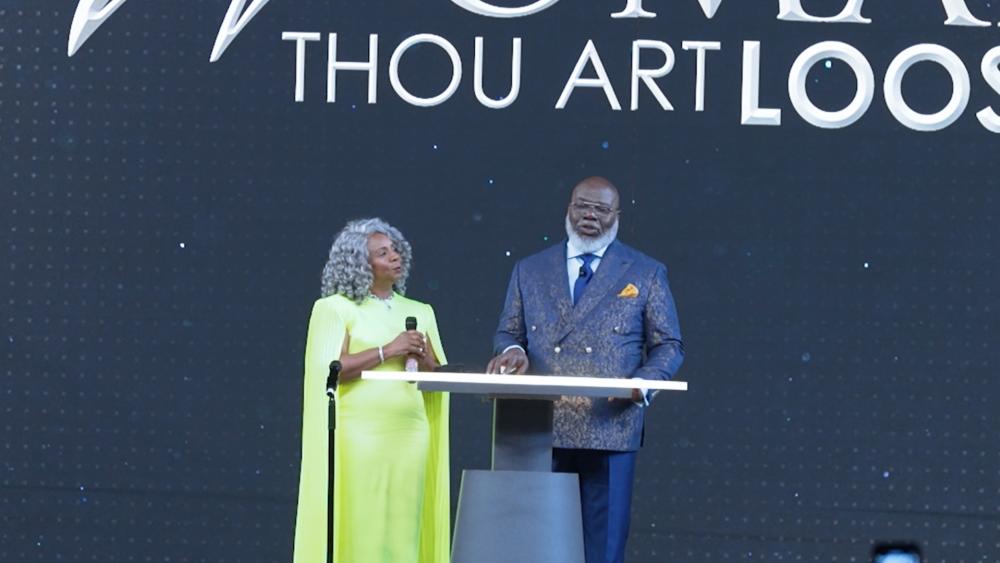 6313259245112
'A Fire that Will Spread:' Bishop Jakes' Woman Thou Art Loosed Changes Hands, Paving Way for Something New

ATLANTA, GA – More than 20,000 women from around the world recently converged on the Georgia World Congress Center in Atlanta for the final Woman Thou Art Loosed Conference. While it marked the end of an era, many say the legacy of the global women's movement will live on for years to come.

Celebration and applause filled the air as Bishop T.D. Jakes and his wife Serita took center stage at the event dubbed The Grand Finale, recalling how the groundbreaking conference began.

"We started Woman Thou Art Loosed in a storefront church in Charleston, WV in a Sunday School class," said Jakes. "It wasn't supposed to be anything but one class. Isn't it funny how you stumble into destiny?"

Jakes told reporters during a press conference at the event he's amazed at that God has done with such a small beginning.

"It's been an amazing journey," he said. "Never in a thousand years would I have ever thought that it have would become what it is. It was totally God. The most fulfilling thing about Woman Thou Art Loosed to me is to look into the eyes of the women and to see their healing."

Healing that many CBN News spoke to say they have personally experienced.

I really have no words to describe the blessings of the Lord that have been upon me. I feel free," said Cheryl Riddick of Suffolk, VA.

Others expressed heartfelt gratitude to Jakes and his family.

Bishop thank you," said Lucretia Bowman of Cincinnati, OH. "First Lady Serita thank you for believing in women. Believing in people that are somewhat left behind. I was one of those people after doing 17-and-a-half years in prison, getting out and realizing that I can be loosed – and I am loosed."

"I don't even know what obstacles they had to get this many people together for this long. But we need it and we're grateful," said Jazmine Jones of Houston, TX.

During the grand finale, Bible teacher Priscilla Shirer encouraged women to hold onto lessons learned from years of teaching at the annual conference.

"Don't you dare leave 30 years of ministry to walk out of these doors and be weak willed women pulled aside by every new age ideology and philosophy of our culture," Shirer exhorted. "Be strong."

It is an issue Shirer believes is part of the movement's legacy.

"There are some doors that a woman like me or someone younger than me, we're not going to have to fight to push down because there has been such an emphasis in this movement placed on the importance of women and what we bring to the Body of Christ," Shirer explained.

It's an impact Shirer said she has seen in her own life.

"There have been a few years where I've just come and sat in the back somewhere and just received encouragement personally," she said. "So to be able to be recharged and refueled and then go back home and be the wife God has called me to be. Be the mom God has called me to be. And then to feel like I have a spiritual under girding from other sisters that I've met along the way that are supporting me in the roles that God has given me."

And on the final night of the conference, Jakes surprised his daughter Sarah Jakes Roberts by anointing her to lead the next generation as Woman thou art Loosed officially transitioned to Woman Evolve, a ministry Jakes Robert's has been leading for the last few years.

According to her website, Jakes Roberts battled and overcame the stigma of teen pregnancy, low self-esteem, toxic relationships, and depression.

She now co-pastors two branches of The Potter's House church – one in Los Angeles and one in Denver, with her husband, Touré Roberts.

"After 30 years of ministering Woman Thou Art Loosed at 45, 46 years of preaching the gospel, the time has come that I must decrease that you might increase," Jakes said as he passed the baton for the women's ministry to his daughter. As Samuel's horn of oil anointed David, I so anoint you. And with every drop of oil that falls upon your head, may the strength and the power of the almighty God rest upon you."

It was also a moment Jakes shared with women in the audience.

"This is an impartation that is bigger than her," said Jakes. "It includes you. It is time for every woman in this room to evolve into your destiny. Life your hands and open your mouth and receive the anointing of God as it overshadows you."

Many expressed excitement for this new chapter in women's ministry.

"I feel like it's the start," Kimberly Ellis of Jackson, MS. "As women, we all have stories. And I think with her father passing the baton it gives us hope."

"I think it's a fire that will spread," said Nadia Nordje who traveled from South Africa to attend the women's conference. "I think the Spirit of God is on earth for revival. Sarah has a massive reach. We don't have a women's ministry in our country. So, it will reach the world by reaching people that has a small impact but it's a massive reach."

"We're sharing everything," said Amanda Nkanyuza who also traveled from South Africa. "We want to encourage people. We're going to start movements that are going to change people's lives."

In the end, it's the vision Jakes has had for women from the beginning.

"I want them to not allow the traumas of their past to limit or incarcerate or intimidate them from pursuing their dreams," said Jakes. "What I want them to do is own, own, own, and own – land, vision, companies, materials, branding, moving forward so that they can model to their children."