At Least 76 Dead from Ian, Rescue and Recovery Ongoing: 'Everyone Needs to Do Something' 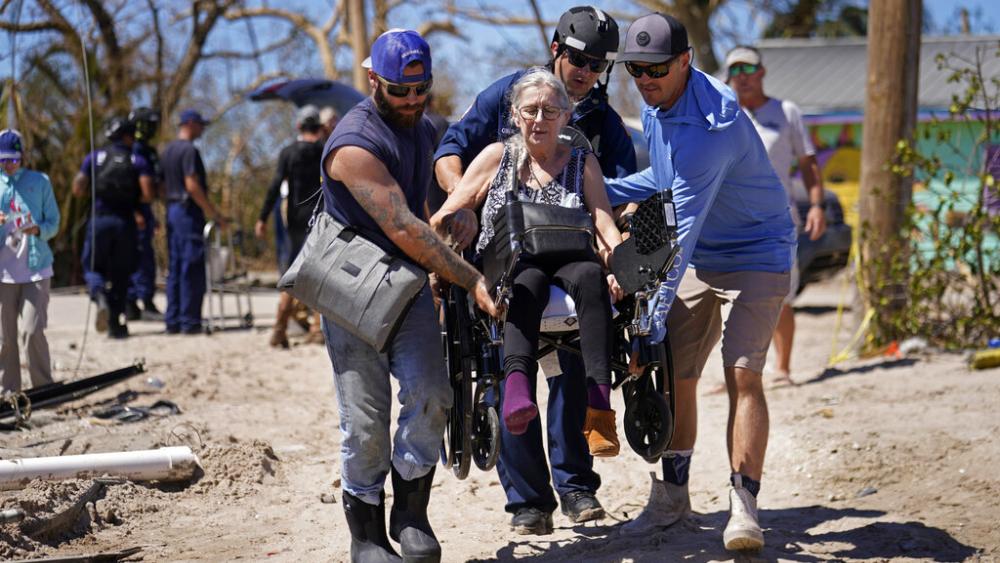 Rescuers help evacuate Suzanne Tomlinson, a resident who rode out Hurricane Ian on Pine Island in Florida's Lee County, Sunday, Oct. 2, 2022. (AP Photo/Gerald Herbert)
6313196563112
At Least 76 Dead from Ian, Rescue and Recovery Ongoing: 'Everyone Needs to Do Something'

FORT MYERS, Florida - It's unbelievable devastation, much like a war zone. That's what residents in parts of Florida are facing in the aftermath of Hurricane Ian, and survivors here in Fort Myers are desperate for help.

At least 76 people are confirmed dead as rescue crews are still searching. So far, more than 1,600 people have been rescued. The National Guard has deployed helicopters to fly rescue missions to people who are still stranded on Florida's barrier islands.

Here at the Legacy Marina in Fort Myers, the devastation is stunning, with boats stacked one on top of the other from the storm surge.

Cleanup is underway, but that could take months. Thankfully, Operation Blessing is here helping rebuild and distribute urgently needed supplies, restoring hope to those who need it most.

OB has been on the ground in #Florida. Parts of #FortMyersBeach are in shambles, 2.5 million people remain without electricity, and sharks have been reported swimming in the streets!
​
​To help those in need, please visit https://t.co/MNdMoWLiTj. pic.twitter.com/zc0WzrYt4J

Fort Myers resident Jeff Fenne said, "It's just unbelievable, you would almost think you had walked through a war zone."

Another local named Nikki Ruzanski told us, "It was 12 hours of a train going through your... The sound was just unbearable for about 12 hours."

More than a dozen people have died in Lee County alone after last week's Category 4 hurricane made landfall.

Roughly one million people are still without power. Beach communities like Fort Myers will take a long time to rebuild and recover.

"The storm surge was what really got us, about six hours or so after the hurricane hit," Fort Myers resident Jeff Fenne said. "That's when the water rose about 10 feet at our condo, a high rise on the river."

As Florida picks up the pieces in the coming days, weeks, and months, Operation Blessing is setting up its base of operations at Calvary Assembly of God Church in Port Sheldon.

Operation Blessing is working hard to help survivors cope. "We have food, pallets of water, tarps to help dry-in the homes. And we have construction trailers with equipment we can come in and help muck and gut the house if there's flooding and things like that," Wright said.

The team has been dropping off supplies in hard-hit Florida cities like Wauchula, Naples, and Port Sheldon since last week. For those who receive a shipment, it's a Godsend.

Pastor Greg Ball of Destiny Church in Naples said, "Operation Blessing were the first ones to respond. Behind me are semi truckloads of supplies that we've been steadily getting out to the people."

Pastor Ball says the damage left behind is an opportunity for people to be a light in this dark time. "Everyone needs to get out and do something, give support, pray. Together we're going to make a difference in the world," he said.

Early estimates here in Fort Myers show Hurricane Ian could have caused roughly $47 billion in damage, making it the most costly storm in the state's history.

During this tragic time, please keep #Florida in your prayers! And #pray for our #disaster relief team as they reach out to heartbroken survivors. You can give a special gift to disaster victims today at https://t.co/XNymGgjHPT pic.twitter.com/36RKkusAwJ