'He Was in Shock': Footage Emerges of Dramatic Rescue as Elderly Man's Car Overwhelmed by Raging Hurricane Ian 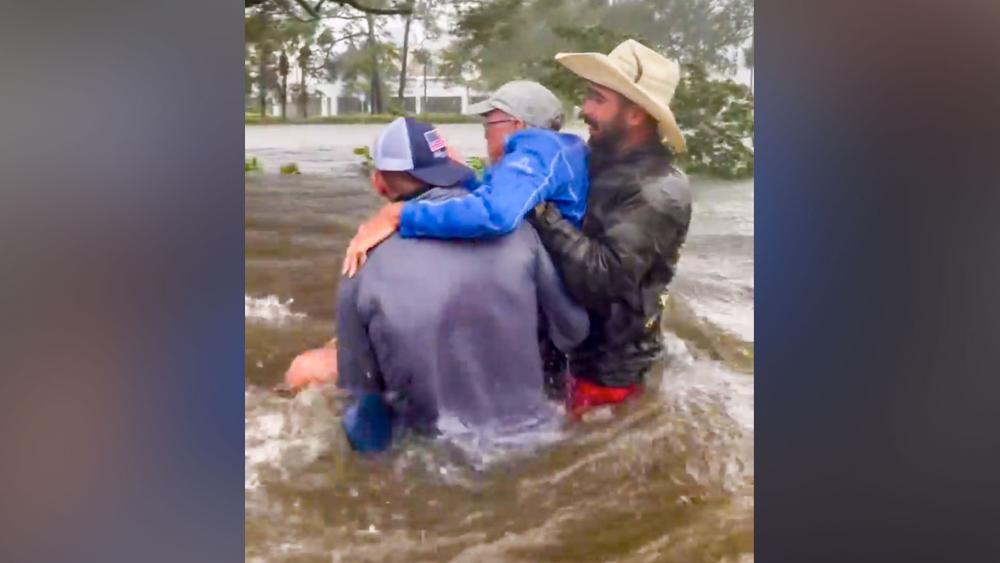 With reports emerging of heavy damage from Hurricane Ian, the sheer size and scope of the impact is just beginning to be discerned.

But amid the horrors and tragedy are also glimmers of hope and kindness.

A dramatic video from Bonita Springs, Florida, shows good Samaritans going out of their way to help an elderly man trapped in his car as winds and flood waters raged, according to Fox News.

“We saw an elderly man struggling in his car, and we knew he needed help,” a man named Benny told Fox Weather.

The man’s car door was reportedly wedged shut, which led Benny and others to grab hold of the door and “pry it open.” The elderly individual inside was seemingly in a state of shock during the ordeal.

A post shared by The Collier County Cowboys (@colliercountycowboys_)

“He was a bit in shock, so he didn’t want to let go, so we assured him we were there to help him,” Benny said.

And the group did just that, safely carrying to man away from the dangerous waters.

Florida Gov. Ron DeSantis updated reporters Thursday about the current needs in the state, as efforts turn to assessment, cleanup, and recovery.

“We have received a major disaster declaration for nine counties, but we do expect more. I just spoke with the President this morning. He offered support,” he said. “I told him thanks for this, but because the storm has moved inland and caused a lot of potential damage in the center part of our state, that we are going to be asking for those counties to be expanded and included there.”

LOOK: Hurricane Ian left a path of destruction in southwest Florida, trapping people in flooded homes, knocking out power and destroying the only bridge to Sanibel Island. A chunk of the Sanibel Causeway fell into the gulf.
: Tampa Bay Times
https://t.co/JwGZdj2L8R

More than 2 million people are without power. Among other developments, a portion of the causeway connecting Sanibel Island with the mainland has been wiped away and will reportedly require a structural rebuild.

Continue to pray for victims and leaders as they navigate this tragedy.