Trafficking Humans and Narcotics to the US Border: Cartels Exploit Migration Chaos 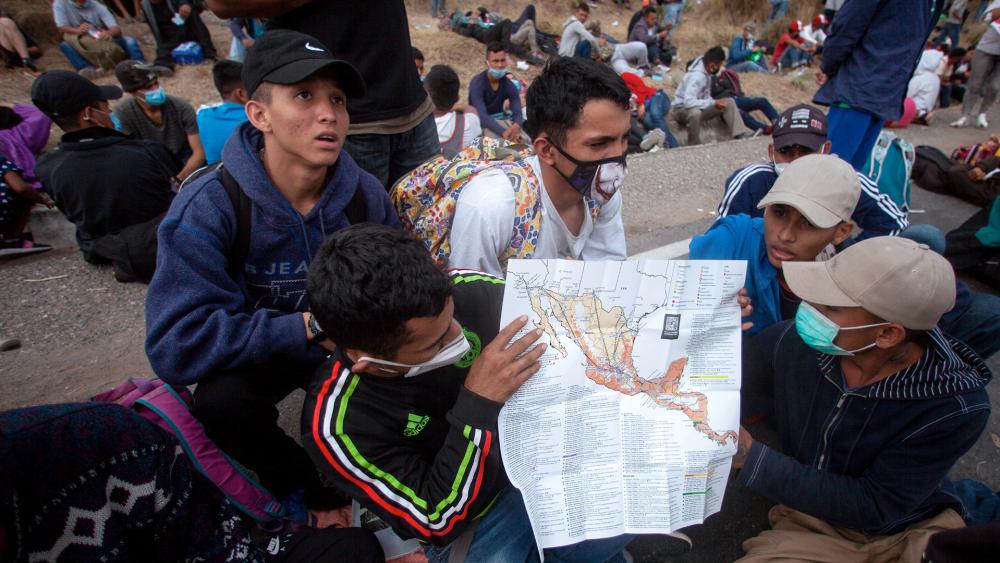 Honduran migrants show their route on a map of Mexico and Central America to reporters, as they sit near a police roadblock at a highway in Vado Hondo, Guatemala, Jan. 17, 2021. (AP Photo/Sandra Sebastian)
6249383312001
Trafficking Humans and Narcotics to the US Border: Cartels Take Advantage of the Migration Chaos

As the border crisis dominates the headlines, drug cartels are taking advantage of the chaos. They're using it to pump record amounts of narcotics into the US.

Every day, boats arrive at the tiny Colombian border town of Capurgana. But these aren't tourists, they are migrants from all across the globe.

Joseph Silver, a resident of Capurgana, said, "It's a humanitarian crisis. Most of them are from Africa, Pakistan, India, Haiti, and some Cubans."

What should be an out-of-the-way fishing village has become the last off-ramp on a human trafficking highway that plunges right through the forbidding Darien gap. These migrants aren't customers, they are products. And their desire to make it to the US means big profits for the smugglers who send them into the jungle.

"I don't normally like to talk too loudly around here but basically that's what they do," Silver said. "They pay the young kids here to be the mules and take them over the mountains or through the San Blas."

But there's another commodity here that's even more profitable these days: cocaine. This country has always been the number one exporter of this illicit drug, but the amount being grown in Colombia today is near an all-time high.

Maria Fernanda Cabal is a Colombian Senator who told us the amount of land used for drug crops has grown in recent years. "With President Uribe, we got as small as 40,000 hectares," she explained. "With President Santos, who sold to the world that he was the peacemaker, we are getting to 300,000 hectares."

Eradication efforts haven't been as effective in recent years due to concerns about the health risks of spraying coca fields from the air.

"We have sixteen soldiers, policemen, and eradicators killed by mines because the guerrillas put mines everywhere around," Cabal said.

I wanted to track a group of migrants we saw going into the Darien Gap on the Colombia side when they came out the other end. So I took a quick flight to Panama drove to the Darien on the Panama side to try and meet up with them. It appears the drug cartels recruit young local men to move the drugs north. They pack backpacks full of drugs and salt the men in among the migrants. The migrants get preferential treatment at the border as officials look the other way. And so in that way these men can get their drugs north without being stopped at the border.

I made it to the camp where the migrants were being kept, but COVID restrictions kept me from entering. I did manage to get through to a 16-year-old Haitian migrant named Madeisy on the phone. She told me about her journey through the jungle.

In all, twelve of the seventy or so migrants we witnessed at the start of their journey did not survive, including a 10-month-old baby who succumbed to dysentery. In addition, Madeisy told me the entire group was robbed at gunpoint, and at least a dozen women were raped by cartel members.

But they keep coming. Locals say the number of migrants is up fourfold in the last two months. The flow of cocaine is keeping pace as well. Panama has seized more than 1.5 tons a week for the past year. But while the cartels have to evade authorities to move their drugs, the flow of people is much easier, because the migrants get support from local governments as they transit through Central America.

Victor Avila is a former ICE agent. He said, "We used to have human traffickers and drug traffickers. Well, that no longer exists. It's now all the cartels. You will encounter the cartels, you will have to pay the Piso, the Plaza, the Cuota to them, whether you are going to turn yourself in or not, these people are paying $3,500, $4,000 a head, to even turn themselves in to seek asylum."

So whether it's Haitians or heroin, Cubans or cocaine, the narcos are getting rich either way.