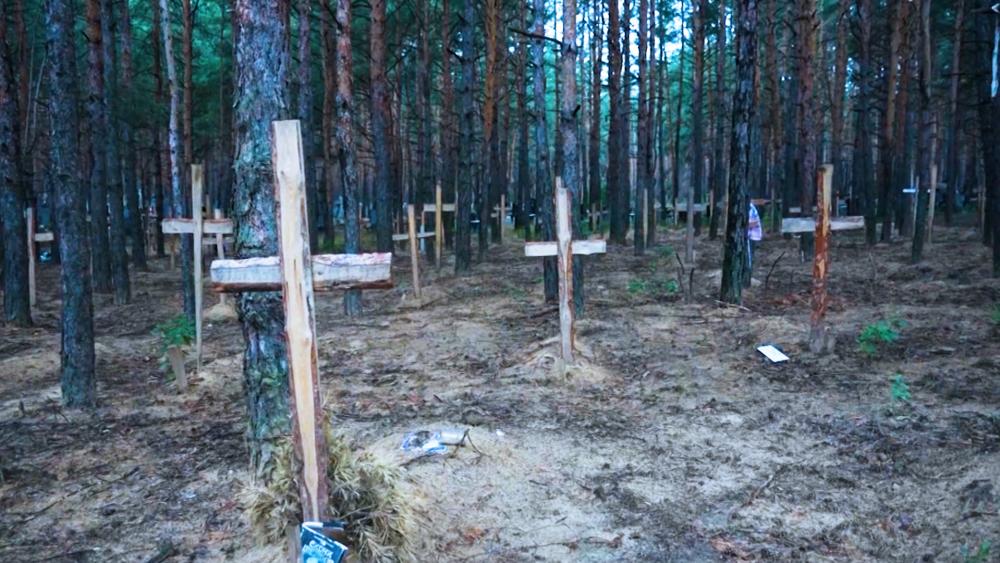 IZIUM, UKRAINE – A mass grave holding hundreds of unknown civilians and Ukrainian military was found outside the recently retaken town of Izium, in the eastern part of the country. It's among dozens of such sites discovered in areas abandoned by Russian troops.

Hundreds of numbered graves populate this forested area outside Izium. The site was discovered after Russian troops posted photos on social media pages. As investigators perform the grisly task of exhuming bodies, they must be careful. Russian troops often booby trap the graves.

"If [a metal detector] bleeps on the place where our brothers are lying, that means that the enemy may have left something like an explosive substance, a grenade that could be thrown [into a grave]," a Ukrainian serviceman told us.

Liz Throssell, spokeswoman for the U.N. Office of the High Commissioner for Human Rights, said, "We have seen the reports about possible mass graves, or what we call collective graves. We are aware of reports in which more than 400 bodies were found in a collective grave in Izium. Our colleagues in Ukraine, in the human rights monitoring mission in Ukraine, are following up on these allegations."

It's a sight all too common in areas recently liberated from Russian forces and it joins a long history of atrocities against Ukrainians.

During the winter of 1932 and '33, Russian troops were sent into Ukraine to confiscate all the food, something that has come to be known as the Holodomor. In that event, more than four million people died, not from being shot, necessarily, although many people were, but mostly from starvation and exposure. A monument in downtown Kyiv commemorates the many children who died – you see a statue of a painfully skinny girl clutching a stalk of wheat.

There are monuments like this all across the country of Ukraine, but if you go to Russia, you are not going to find monuments like this because Ukrainians haven't attacked their neighbors to the East. It's always come in this direction, from Russia against Ukraine.

Just north of the city stands another deserted forest once known as the end of the line for anyone who didn't support Stalin's regime. It is called Bykivnia. A long list of names etched in stone represents just some of the hundreds of thousands of people who were murdered by the Soviet Union and then dumped into Mass graves here in Bykivnia.

Now the Russians are again making lists of people right this minute in the occupied areas of Ukraine, in a process they call filtration. And if you take filtration to its logical conclusion, what you end up with is another place like Bykivnia.

Reports from occupied areas tell of a three-step filtration process, whereby Russian troops try to identify anyone who does not agree with Vladimir Putin.

Sasha, a Ukrainian refugee from Mariupol, said, "They sit down like this, facing away from you. They start flipping through your phone, smiling, and his partner says 'What is this? Well, well, what are you doing in this photo?' And 'I see you are a Baptist. Uh-huh.' But that is the easy part compared to what comes next."

Anyone suspected of disloyalty is sent to a filtration camp. There, beatings and torture are reportedly common. Those who survive are often forcibly relocated to remote parts of Russia.

Aliana Luniova, Advocacy Director for ZMINA Human Rights Center, said, "The tactic of the Russian empire and Soviet Union is to change the population. So they are trying to replace the population with those who come from the far east of Russia. They try to replace bureaucrats for Russian bureaucrats. So this is the tactic of the Russian politicians."

So far, it's estimated nearly 1.5 million Ukrainians have been sent to Russia. According to survivors, many who refuse end up in unmarked graves.

The full extent of the atrocities committed against Ukrainians has yet to be revealed, but even six months after the beginning of this war there are still people that are living their lives in bomb shelters all across this country. And it's not the sound of explosions outside that scares them. What scares them is that they will be forgotten by people like you and me.

"We want the world to know what is really happening and what the Russian occupation has led to. Bucha, Mariupol, now, unfortunately, Izium. Russia leaves death everywhere. And must be responsible for it. The world must hold Russia to real responsibility for this war," said Ukraine's president Volodymyr Zelenskyy.