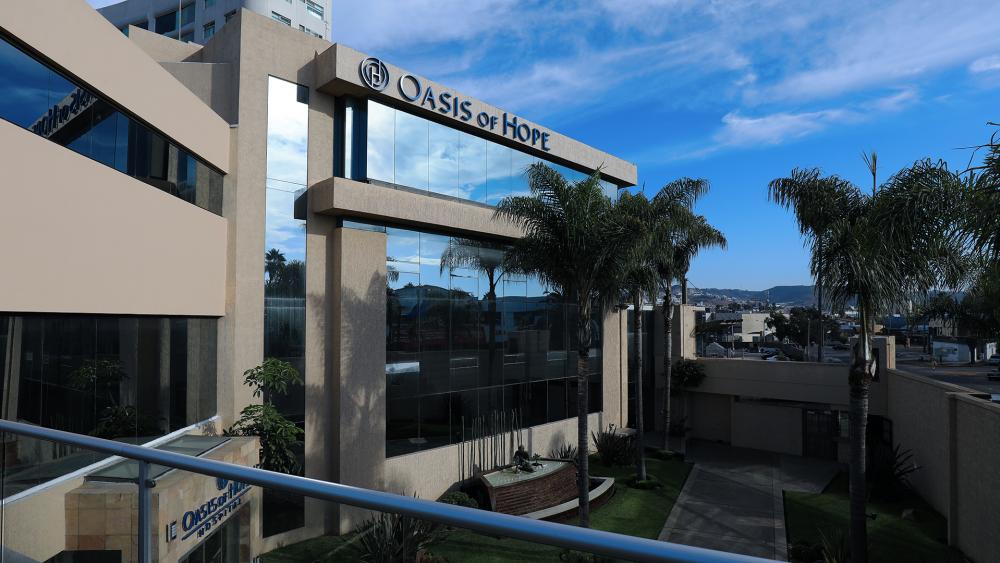 August 2017. Michelle Tucker remembers the words from that day while she was in the doctor's office as her oncologist delivered the news.

"I was told I had about four weeks to live, to go home and get my affairs in order," Tucker told CBN News.

The 46-year-old mother of three from Arizona had battled cancer since she was 19. It started in her breast, first spreading to her thyroid and then pancreas.

"I figured I would take my children maybe to the beach for the first week of those four weeks," Tucker recalled. "We love hearing the waves crash, so I figured let me take them to the beach and we'll just kind of like ride it out."

Yet, there was something stirring in her that said she simply could not give up without a fight.

"I had the attitude of like 'Who are you to tell me my expiration date? There's only one person that can do that and that's not a doctor, no offense to medicine, that's the man upstairs,'" Tucker recalled.

In desperation, she researched alternative cancer treatments and ended up at the Oasis of Hope Hospital.

"You get diagnosed with cancer, you're not going to travel to Tijuana, Mexico. But when they have reached a point where the doctor is saying 'We really can't do anything else for you.' This is the typical person that comes to Oasis of Hope," said Oasis of Hope CEO Daniel Kennedy.

Twenty-five miles south of San Diego and just across the U.S. - Mexican border, Tucker believes God is using Oasis of Hope to give her a chance to continue living.

"From the moment you walk in the door, you feel this overwhelming spiritual presence," she told CBN News during a visit to the facility in Tijuana. "There's the pastor that sings with you. They pray with you. They become a family with people with strangers, complete strangers, from all over the world, all walks of life."

Tucker has been in remission now for two years.

Oasis of Hope was started in 1963 by the late Mexican doctor Ernesto Contreras, Sr., who believed in taking a holistic approach to fighting cancer.

His son, Dr. Francisco Contreras, a surgeon and oncologist specialist, now serves as the hospital's president.

"My father felt that the reason for the failure in oncology, and medicine overall, is that we have become just mechanics of the human body," said Contreras.

The idea for Oasis of Hope originated back in the early 1960s when Contreras' father, who was also a physician, decided to go on a mission trip to Greece and on that trip discovered three important elements that are today at the core of the hospital.

Contreras says while traditional oncology focuses on destroying the tumor, his father wanted the hospital to focus on the patient's emotional renewal, spiritual revival as well as physical restoration.

The founder's grandson, Daniel Kennedy, is proud of his grandfather's lasting legacy.

"There is no other clinic in Tijuana that actually has a pastor on the payroll, praying for patients every day, opening with praise and worship," Kennedy told CBN News.

Miracles Bringing Back Life, Hope, Faith, and a Future

Ernesto Lopez is that pastor. He used to lead a local church in Tijuana. Now he walks the corridors of the hospital ministering to the spiritual and emotional needs of patients.

"Yes, a lot of miracles," Lopez responded. "Miracles of healing, miracles of salvation, miracles of bringing life back, bringing hope again, bringing faith again and have a hope and a future."

Using a combination of conventional treatments with alternative therapies such as whole-body hyperthermia, Ozone therapy, and dendritic cell vaccine immunotherapy, Oasis of Hope says it has treated more than 100,000 cancer patients from 60 countries.

"The majority come from the United States because we're just across the border from San Diego, but we've had patients from South Africa, from Vietnam, from China, from all over the world," Kennedy said.

Ninety percent of meals served at the hospital are vegan-based.

"We don't want to make anybody feel like you have to leave your old life. Let's just add more greens, more vegetables, and kind of enjoy food and go along with it," Tessada told CBN News during a cooking demonstration.

The hospital grows vegetables on its rooftop garden and teaches patients how to prepare healthy meals.

"What the patients tell us is, 'I've never done this. I've not used to eating these foods,'" Tessada said. "So what we do is help them to see, hey, you can make very healthy dishes, very fast, and very easy.'"

It took a while, but Caleb Dominguez is now sold on eating healthier thanks to Oasis of Hope.

Doctors in the U.S. told the 35-year-old they could do nothing for him after being diagnosed with an advanced stage of leukemia.

Then he came to Tijuana.

"I was going through their treatment plan and within weeks everything that my doctors were trying to fight had shrunk by half. The cancer numbers were going down. My strength was rising. My blood counts were coming back up. I just felt life being restored back to me," Dominguez told CBN News.

Today, because of his experience at the hospital, Dominguez said his whole approach to life has completely changed.

His eating habits, his attitude, and his walk with God have gone through a radical transformation.

"Having known what I've been through. To be alive and well and healthy, taking all the lessons and experience here, I carry it with me everywhere I go," Dominguez said.

There remain several opinions on this alternative approach and others.

For example, the American Cancer Society states some complementary methods have generally not been proven to help prevent or treat cancer or its symptoms.

It recommends discussing any treatment patients might consider with their doctor or cancer team.

While the doctors at Oasis of Hope are proud to share success stories like Dominguez, Tucker's, and others, they point out not all patients who come here will make it.

Still, Contreras believes all deserve to be treated with compassion and the love of Christ.

"I believe that hope is a very powerful tool and that all patients should have hope because as a very old doctor said many, many years ago to a parent of a child, 'While there's life, there's hope,'" he said.

Contreras explained what he, along with his team of doctors, nurses, nutritionists, pastors, and counselors is negotiating for, is more time for patients.