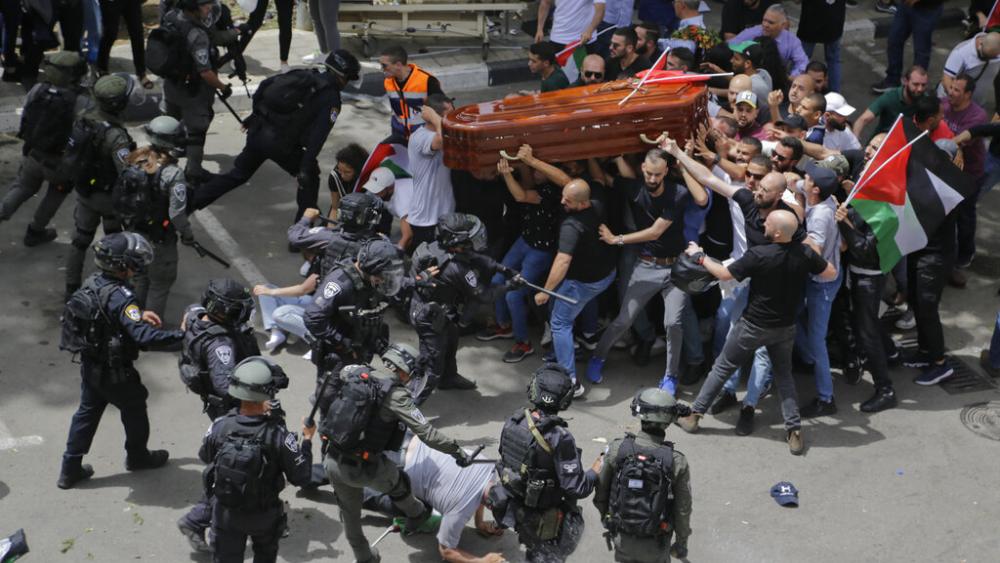 JERUSALEM, Israel – The top Catholic clergyman in Israel on Monday condemned Israeli police officers for clashing with mourners at the funeral of a prominent Palestinian Christian journalist last week, calling their actions a “disproportionate use of force” and a violation of the freedom of religion.

Latin Patriarch Pierbattista Pizzaballa told reporters at a news conference on Monday at St. Joseph’s hospital in Jerusalem that the police’s behavior “disrespected” the Catholic Church. Church leaders said they are consulting with the Vatican and weighing possible legal actions.

Israeli police are facing domestic and international backlash over a video showing them beating mourners at the funeral for Al-Jazeera journalist Shireen Abu Akleh, who was killed while reporting on an Israeli counterterrorism raid last week. Footage released Friday shows Israeli officers beating the crowd following a brief standoff with mourners – during which some attendees threw objects at police. At one point, officers charged the pallbearers with batons and forced them to nearly drop the casket.

Pizzaballa said the police attacked a crowd of mourners who were waving the Palestinian flag as they led a funeral procession from St. Joseph’s hospital to a church in the Old City about 1.24 miles away from where the service for Shireen was to be held.

The Christian leader also played new footage from security cameras inside the hospital. It showed dozens of Israeli police officers rushing inside the hospital and shoving people inside, including patients. One man on crutches was knocked down amid the chaos. This happened before the funeral procession began, Israel's Kan public broadcaster reported.

Israel did not immediately comment on the leader's accusations or the new footage. CBN News reached out to Israel Police for comment but did not hear back.

Clashes at the funeral

According to a statement released by Israel Police on Friday, officers reached an agreement with Abu Akleh’s family on funeral arrangements ahead of time to carry her by hearse from the hospital to the church in the Old City. However, “about 300 rioters” allegedly violated that arrangement by chanting nationalist slogans and carrying the journalist’s casket instead of driving it in a hearse.

One video posted on Twitter shows funeral attendees stopping the hearse from entering the hospital to retrieve Shireen's body.

“Israeli police intervened to disperse the mob and prevent them from taking the coffin, so that the funeral could proceed as planned in accordance with the wishes of the family,” the Israel Police said in a statement on Friday night.

However, Abu Akleh’s family disputed claims that a mob took Shireen’s casket against their wishes. The family told The Associated Press and Israeli media the police only wanted to know the route of the funeral procession and there was no other agreement.

“The minute we started walking out of the hospital we were bombarded by several Israeli police, and just for nothing. We were just leaving the hospital for the church. We were shocked to see them just starting [to beat] people, throwing sound grenades, tear gas. All this — we cannot explain it. This happened without any explanation,” Abu Akleh’s brother Anton told the BBC.

Anton said police did not want nationalist slogans or Palestinian flags. But he said “this is something we cannot control” because more than 10,000 mourners showed up for the funeral.

On Friday, Israeli Police Spokesman Eli Levi doubled down on claims that funeral attendees attacked officers before the funeral began, and posted a video showing one person throwing an object at police.

Numerous videos on Twitter show Palestinians throwing objects at Jerusalem Police. CBN News is unable to independently verify when these videos were taken during the clashes. The timing is important because the police say the demonstrators threw objects before they charged the crowd. However, the family of Abu Akleh says that's not true.

One video shows a man hurling at least 15 rocks and objects at the police.

Another video shows a young boy throwing a rock and then putting on a "PRESS" vest afterward.

Got some videos from the clashes between Israel Police and mourners at the funeral of Shireen Abu Akleh.
Found some interesting details:

1. A kid with a white t-shirt. Shortly after throwing a rock, was given a journalist vest with a "PRESS" writing. pic.twitter.com/PmsKzMYFlD

A third video shows a demonstrator throwing an object and then blending into the crowd.

After facing allegations of using unnecessary and disproportionate force, Israel Police launched an internal investigation into the officers’ actions at the funeral amid the backlash.

Dueling Narratives Over Who Killed Shireen

Meanwhile, Israeli and Palestinian leaders are offering dueling narratives over how Abu Akleh, a veteran Palestinian journalist and household name, was killed in the first place.

Abu Akleh was shot dead last week while covering an Israeli counterterrorism raid in the Palestinian city of Jenin – biblical Samaria. Footage shows her wearing a vest clearly marked with the words “PRESS” and a protective helmet.

Initially, Israel said Palestinian terrorists “likely” hit Abu Akleh. Israel’s Foreign Ministry posted a video they say supports that claim. Then, on Friday, Israel said errant fire from Israeli forces could have also killed her. Israel says it needs to have access to the bullet to reach a conclusion and called for a joint investigation with Palestinian officials.

However, Palestinian leaders have rejected a joint probe, saying they cannot trust Israel to investigate its own security forces. Palestinian officials and witnesses, including a journalist who was with Abu Akleh, say Israeli forces shot her.

“We also refused to have an international investigation because we trust our capabilities as a security institution,” Prime Minister Mohammed Shtayyeh announced. “We will not hand over any of the evidence to anyone because we know that these people are able to falsify the facts.”

The Palestinian Media Watch (PMW), an Israeli watchdog organization that monitors the Palestinian Authority, argues that Palestinian leaders won’t do a joint investigation because they are “anxious to generate international condemnation of Israel over the death of the journalist.”

An initial autopsy of Abu Akleh’s body by Palestinian coroners found that it was “not possible” to determine yet if she was killed by Israelis or Palestinians. The coroner, Dr. Ryan al-Ali of the Pathological Institute at the a-Najah University in Nablus, has stressed that the results of that autopsy are only preliminary, and more analysis will be done.

A Wave of Violence

Abu Akleh’s death comes amid near-daily raids in the West Bank by Israeli forces to combat a recent terror wave that has killed 19 Israelis.

The director of the PMW Itamar Marcus told CBN News in a statement that the terror attacks were preceded by a wave of incitement.

"In recent months the Palestinian Authority has been guilty of incessant terror promotion. For example, Mahmoud Abbas’ advisor on Islam and Head of the PA Islamic Courts, Mahmoud Al-Habbash, called on Palestinians not to be lazy during Ramadan but to follow the example of Islam’s Prophet Mohammed who started wars during Ramadan.

Defense officials says Hamas has not played a role in planning any of the deadly attacks, including one it claimed responsibility for, but is instead exploiting the bloodshed to bolster its image.

Abu Akleh's brother told The Times of Israel that he hopes her death could bring an opportunity for peace between Israelis and Palestinians.

“I ask the Israeli people to see this as an opportunity for peace. The Palestinian people wants peace, aims for peace. This feeling should be shared,” said Anton. “I wish for this to be a new beginning of a new age in our country and in the Middle East.”

Abu Akleh,51, was born in Jerusalem to a Christian family and was an American citizen. She leaves behind her brother.