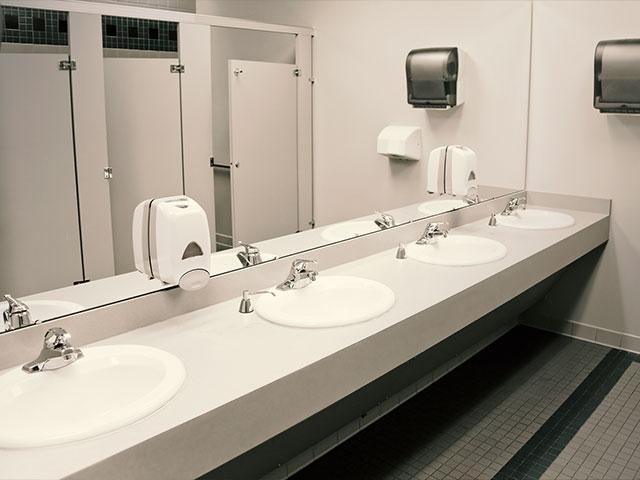 Political reporters are having fun writing headlines this weekend. A few alternatives we thought of include:

But the reality is states, schools and even students are having to address the seriousness of this situation.

The debate over transgender Americans' use of the restroom of their choice has extended far beyond the aisles of Target and the hills of North Carolina.

The "bathroom debate" has landed squarely at the front doors of every public school in the country. The Obama administration sent guidance directing public schools to allow transgender students to use the bathroom and locker room of their choosing.

"We must ensure that our young people know that whoever they are or wherever they come from, they have the opportunity to get a great education in an environment free from discrimination, harassment and violence," Education Secretary John King J.R. told The New York Times.

But should parents be surprised? Probably not. The Obama administration is no stranger to the topic. In fact, LGBTQ rights have become the moniker of President Obama’s second term.

But this one is a bit different. This isn’t about a few (or 1 million) conservatives choosing a new spot to pick up paper towels. The decision whether or not to send a child to school is a bit weightier.

The White House says they are simply responding to schools requesting advice for dealing with the complex issue. They also reiterated this is NOT an enforcement action, but simply guidance from the Department of Education.

"It is my strongly held belief, and I'm pretty sure I'm going to be right about this, that the vast majority of schools, and school districts, and school administrators across the country will welcome this guidance and will implement it," Earnest said.

"For those that don't, there is an established process for them to raise any concerns that they may have. There is an established process for that and we will go through it. But the vast majority of schools and school administrators will incorporate this advice as they confront the challenge of insuring that they are promoting the kind of respectful, safe learning environment that can ensure the success of all of their students," he continued.

The guidance does come with a few caveats. The administration suggests, but doesn’t require, schools to provide private areas or install curtains for students who may feel uncomfortable.

But some politicians aren't buying it.

"He says he's going to withhold funding if schools do not follow the policy. Well, in Texas, he can keep his 30 pieces of silver. We will not yield to blackmail from the president of the United States," said Texas Lt. Governor Dan Patrick.

"This underscores the risk of electing a right-wing radio host to statewide office," Earnest fired back.

The comfort of students notwithstanding there is the much larger debate of state's rights.

Many conservatives, including some of the candidates who ran for the Republican nomination for president, believe the federal Department of Education should be dismantled. That's because, oftentimes, one-size-fits-all policies for education don't work. Policies that work for New York City schools don't always make sense in Buford, Wyoming.

Also, educating our children is personal. For parents, having some control over what their children are learning and how they're learning it are important.

Over and over (and over) again Earnest said the guidance sent by the DOE and DOJ is just that – "guidance." However, he also said that if schools disagree with it or choose not to "implement" it then “there is a process for litigating differences."

You don’t have to be a lawyer to understand the word "litigating" has teeth.

Therefore, there is an implicit threat: schools that don’t comply may face lawsuits or the loss of federal funding, which is comical since "federal funding" is tax dollars paid for by Americans living in every school district in America, but we digress.

Earnest says there is no coincidence that the Obama administration’s guidance came out just days after the DOJ sued North Carolina over its bathroom bill. He says the federal Department of Education has been receiving requests from school districts asking for guidance on transgender bathroom challenges "for years."

He also says President Obama thinks the Department of Education should be "responsive to requests it receives from school systems" so what took so long? "Years" is a long time to have to wait.

Dr. Russell Moore wrote this week about the president’s guidance and the overall gender identity issues facing America. Here’s an excerpt from his article:

The church should not see everything through the grid of gender. The Sexual Revolution, chaotically, wants to tell us that gender means nothing and that gender means everything. Neither is true. We should recognize that unbiblical caricatures of masculinity and femininity were always harmful, but now are potentially deadly. The little girl in your church who doesn’t like princess movies or dolls, and who would rather spend a Saturday in the deer stand, increasingly now is told by the culture around her that maybe she’s not a woman at all. Only a church that defines its vision of masculinity and femininity from the Word of God, not from cultural tropes, can speak to her. If you don't have a category for a rough-and-tumble woman, like Jael, or a harp-playing man, like David, your church is handing over your children to the gender ideologies of the moment.

The truth is that the male/female sex difference is objectively real. Biological science is built off of this reality. More importantly, the mystery of Christ tells us that the male/female binary points us beyond nature to the gospel itself (Eph. 5). We must tell the truth about this. John the Baptist lost his head for saying that Herod could not have his brother's wife. Some now will be targeted as culturally unacceptable because they tell Herod he can't be his brother's wife. That will take courage and compassion and, above all, it will take Christ.